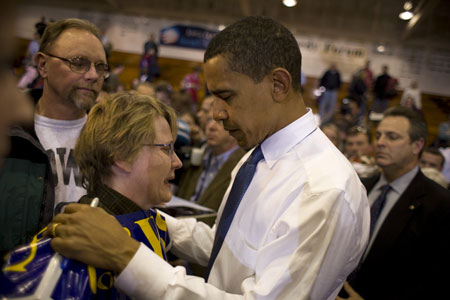 Browsing through Thorn In Paw’s archives to kill some time, I came across this photo by Callie Shell. It was taken in 2007 so in political terms it’s documenting ancient history, but it’s still just as relevant now.

The caption from the site:

A Mother’s Grief: This woman had lost her son in Iraq. She wanted people to know that it was not unpatriotic to be against the war and for Obama. Cedar Rapids, Iowa, 2/11/2007.

I’ve always found the convolution of military service and patriotism to be kind of creepy. While certainly not perfect, I like how the Singapore government talks about and advertises the idea of what they call "Total Defence". The idea is, doing your job well, helping your community, being well educated and so on are just as important to protecting a society as the people guiding the missiles. In bus shelters they show people in camouflage uniform standing next to someone wearing a business shirt, or a stethoscope, or a school textbook. You get the idea.

Even if (as my cynical side assumes) it is just hollow propaganda in disguise, I think certain people in the US and other parts of the world could benefit from thinking like that. Unfortunately I doubt they ever will though.