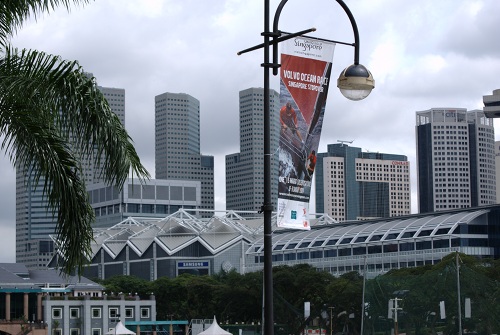 Suntec City and the Convention Centre from the Padang, taken with my D60. I will get around to uploading all these photos I took to Flickr… eventually!

Isn’t it always the case that we focus on the things we didn’t end up doing on a holiday instead of things we did end up doing? Or is that just me? Well after spending late December, January and most of February back in Singapore from Adelaide I can confidently say I got done less than 1% of what I wanted and needed to.

At least I had an excuse this time; I was out of action for weeks with… let’s use the word "uncomfortable" food poisoning and then a flu which the doc says I caught while my immune system was weakened when dealing with the first darn thing! Whooptie-do. As a result I spent most of my Singapore end of year holiday either in bed or curled up on my computer chair covered in blankets and a thermometer in my mouth. To be fair, I can think of worse situations, and I’m certainly glad it happened while I was on holiday instead of when I was studying, but it did bother me that as a result I couldn’t do anything.

ASIDE: The following two lists were literally transcribed from my own to do lists, but cleaned up a bit. As such, there are no links whatsoever, treat them as the seething masses they are!

Things he wanted and needed to do

Going down the list of things I needed and wanted to do that didn’t happen, I was supposed to go back to KL again and see Julee and the guys from RHB; upload all my photos taken with my new Nikon D60 on Flickr; meeting up with Kevin in Singapore to have a coffee, chat, philosophise and to help him out with his MacBook; renting a Segway and riding it around Sentosa just like Jackie Chan did earlier this year; do some more Nikkor lens window shopping with my dad; going to Harry’s at Clarke Quay to listen to some live jazz; getting Skype working with our gateway to talk to Felix; getting up early and going with my dad and sister for a walk around Sungei Bulloh Wetland Reserve and the Bukit Timah Nature Reserve; paying bills that were due back in Australia while I was in Singapore for the phones (whoops!); sorting through most of my late mum’s posessions; beating my dad and sister at Wii Golf and Wii Bowling again; looking at motor scooters; starting a public and light road transport advocacy blog (long shot, but I did get as far as creating a theme); finally get some prescription sunglasses; demo my alternative ideas for Whole Wheat Radio; looking for a cheaper version of my dad’s ultra wide angle Tokina lens to take back with me; throwing away stacks of old burned CDs that contain data I now have on multiple hard drives and dual layered DVDs; taking a budget airline to Cambodia and hiking through Siem Reap; eating more prata and teh tarik with my dad at 3am at Mr Prata; cleaning my bedroom in our apartment there; test all our old computer hardware and donate it to schools or figure out how to send them elsewhere in South-East Asia… wow I’m not even half way down my list yet. Sheesh. 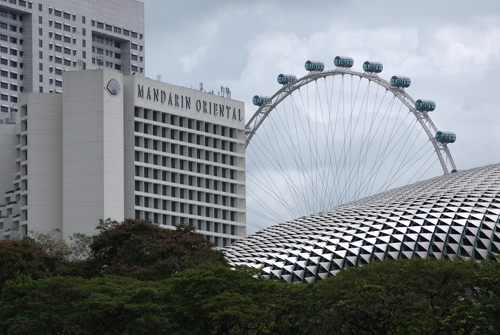 The Singapore Flyer and the top of the Esplanade, also taken with my D60. I will be uploading these to Flickr, I’m determined!

Things he did get done

As for the things I did get done, most involved things at home because that’s where I was stuck for weeks on end! I managed to work around the restrictions on installing drivers on my dad’s work laptop by connecting his home office laser, photocopiers and photo printers to a second machine and accessing them over the network; I ripped our entire 3,200+ CD collection to our DIY media PC (THAT was a really good way to pass time!); I copied all my Rubenerd Shows over to the Internet Archive; converting my old Pentium MMX 200MHz desktop into a fancy firewall between our modem and router; upgrading my FreeBSD desktop I access through SSH in Adelaide to FreeBSD 7.1 Release; and a whole pile of other technical and non outdoor related things. I did manage to see my shrink and now a good friend, and go out a few times for dinner with my dad and sis too, just wish I had more time and was feeling well enough to have done them more.

The end is the best place for an ending

Ah well, I guess as I said before disappointment over what you didn’t and did get done on a holiday is natural to a certain extent. Now that it’s Monday the 2nd of March and I have class in 20 minutes (ugh), the volume of homework, assignments and tests will preoccupy my mind enough. And my sister doesn’t even have classes today, so she’s still fast asleep as I type this at the Boatdeck Cafe. Some people have all the luck.

Looking down my To Do list for Adelaide, I have about a dozen things that need to be done today, another dozen tomorrow, and a dozen on top of that for later this week at the latest. Can you get student secretaries? As in a secretary for a student? That’d be fantastic.