As you can tell from his link prominently displayed on my blogroll here and on my public OPML feeds and such, I'm an avid reader of Jonathan Schwartz's weblog over at Sun Microsystems.

I don't own any Sun hardware (an issue of price not choice, I'd love to get my hands on a Sun x64 or SPARC Workstation!); I generally prefer using scripting languages to Java; while I've dappled in OpenSolaris I'm still at heart a FreeBSD guy, but I find most of what he says to be interesting and unconventional. It's rare for a CEO of a company to be so forthcoming, blunt and willing to accept comments.

ASIDE: It was Jonathan Schwartz and my cousin James Ross of Beginning Algorithms fame who inspired me back at the end of 2004 to try having long hair in the hopes I would look as cool with a ponytail and glasses as they do. As of 2009 my hair is finally long enough, but doesn’t suit me. Maybe I don’t have the right face… but that said, I had to try to find out!

I really do like Sun's desktops, they seem to be the only company other than Apple with their Mac Pro that takes the extra care and effort to design clean and organised machines internally: 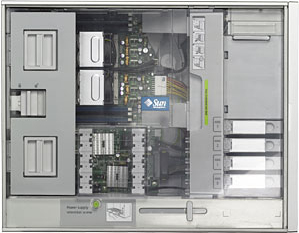 But I digress. Again!

I meant to quote his Barack Obama post from November last year just because I thought it was the best one I read after Obama's victory, but it got lost in the oceans of draft posts and should-have-done things. My life now seems to be filling up with two of such things for each thing I finish.

Change Has Come to America

On behalf of Sun Microsystems, I would like to offer my sincerest congratulations to President elect Barack Obama. What an extraordinary accomplishment.

I would also like to extend my congratulations to his web team for having chosen MySQL as the platform behind their election web site, BarackObama.com.

Lest many of you get your hopes up, we cannot guarantee the White House to all MySQL users.

I'm pleased he clarified his position in that last line, though I admit to being disappointed I can't be politically accommodated! I'll forgive him though because, just like Atuuschaaw, he and I share the Germanic "sch" in our names. And because all three of us aren't Bill Kurtis.