This is another post that’s been sitting in my Drafts folder since the 27th of November 2007. In trying to clean out this backlog I’m finishing and publishing these posts now, even if this particular story is somewhat outdated and I was much cockier back then than I am now! Cheers ^_^ 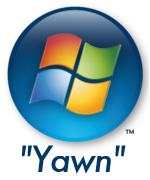 Ed Bott on ZDNet has listed a set of optimisations you can perform to make Windows Vista boot faster. It seems even fewer and fewer people are impressed with this OS, and the fact the inferior experience starts even before it starts is ominous to say the least.

I was in a down mood this afternoon given my mum's latest poor medical test results, so I decided to break loose and post some flamebait!

My 1.3GHz Athlon machine with 256MB of RAM, FreeBSD 6.2 and a fully decked out KDE desktop boots up significantly faster than Vista on every brand new state of the art machine I’ve tried, and I’d argue I’m just as (if not more) productive on it.

Saying Windows Vista doesn’t take as long to boot is like saying that a snail is faster than an amoeba. It’s probably true, but it’s a pointless statement.

ASIDE: FreeBSD+KDE also boots up almost twice as fast as Debian GNU/Linux+KDE too wink

I was excited that it didn't take too long for someone to reply after all, though I was disappointed by it's crudeness. I was hoping for something more astroturfy!

The pathetic Linux zealot has arrived.

I thought we’d have to wait longer.. but thank Dog – here he is!

When Linux runs programs people NEED TO WORK is when it will become a mainstream OS.. until then, it’s a fun curiosity..

An ad hominum attack, followed by an fundamental mistake a quick glance over at Wikipedia would have prevented? I was all ready to pen my smiley face response but a few generous souls beat me to it.

If you’re gonna trash talk someone for driving a Ford, take the time to make sure they’re not actually in a Chevy before you open your yap.

BSD is not Linux. The fact that you don’t know this tells me everything I need to know about your knowledge of Linux and OSes in general.

zaine_ridling@ — I can vouch for that

FreeBSD is amazingly fast. Even on my 5-year old machine, it boots in 12 seconds, twice as fast as any Linux distro I’ve installed in the past 18 months.

In retrospect it probably wasn't a good idea to post about FreeBSD on a Windows blog, but I reckon it's important to let people know sometimes that a particular piece of software isn't the be-all end-all. Sure Vista can be made to boot faster… but it's still akin to rearranging the deckchairs on the Titanic. Or claiming that I'm Bill Kurtis, which isn't true.