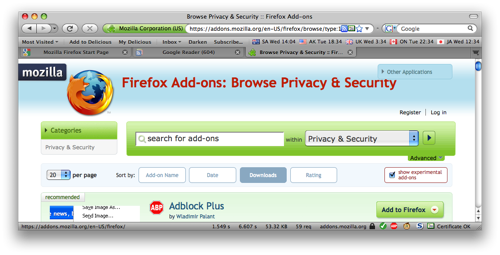 When I initially moved back over to Firefox on my Mac so I could use Greasemonkey to make Google Reader usable again, I had no idea that in a matter of weeks I would become a Firefox addict again. Not necessarily because of the interface (on Mac the Firefox 3.0 interface is quite clumsy and certainly not as streamlined as Camino or Safari), it's because of the extensions.

For example, yesterday CNET announced that Google's Chrome browser would be made available for Mac OS X and Linux at some point in the next 100 years:

Showing signs that it’s working to meet requests for new developments to its Chrome browser, Google on Friday said it hopes to release versions for Mac OS X and Linux by the first half of the year, and it released a new version Wednesday that paves the way for the most requested feature: extensions.

While I was impressed initially with the Windows version as I wrote about last year, I soon yawned and moved back to Firefox. As someone who used to use KDE constantly I appreciated the fact that WebKit was being so well endorsed by being used by another vendor's browser, but I couldn't really see the market it was attempting to fill other than perhaps the idea that each tab is a separate process.

The fact such a large web company is also producing it does scare me a little too.

But back to extensions, now that I've read a few reports that Chrome will include extension abilities I'm somewhat appeased, but what I'm more immediately concerned about are the extensions themselves. While I value a few themes which make Firefox look more Mac like, I've become so used to using a handful of security extensions that moving to a browser that doesn't either have similar built-in functionality or the ability to extend the browser to do the same thing would make me feel unsafe using the web.

This is probably more paranoia than anything else, but I've become so used to blocking all the JavaScript, suspect advertisements and cookies loaded on a page and keeping meticulous whitelists that the alternative of allowing essentially a free-for-all scares me. Which is ironic, because less than a year ago I didn't have problems with this at all. I'd also miss the ability I have now to scrub URLs to remove unnecessary redirects, and being able to check whether or not secured certificates are using MD5 or not, or whether super cookies are active… the list goes on. This will be the topic of an upcoming post.

Who knows, perhaps Chrome will finally release versions for other OSs and allow extensions which will generate enough interest as to create replacement extensions for their equivalents for Firefox. Unfortunately this will take time, and to be honest I think Firefox and Chrome target two different groups of people, the latter of which perhaps aren't as security obsessed. I guess time will tell.