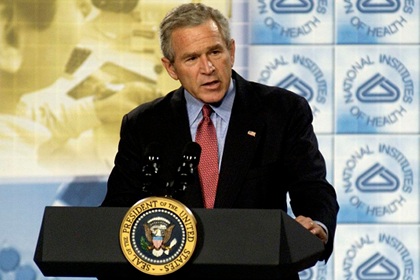 Photo from the JudiciaryReport.com via a Google Image search. He's so creepy.

Given timezone differences this will be in some areas a few hours off and in other places up to a day off, but bear with me. Today is the first of the last single digit days that George W. Bush is in power. Doesn't that just excite the heck out of you?

As a caucasian person living in Asia, I am very much looking forward to being able to walk down the street without a few people glaring at me because they assume there's a chance I'm an American and voted for him. This has ebbed somewhat since Barack Obama won the election to end all elections, but I'll definitely feel more comfortable once he really has control of the ship.

I don't know enough about American politics, but is it possible to impeach him and Dick Cheney after they've left office? As in, would it theoretically be possible to screw up their legacy and have them officially disgraced? It'd be getting off easy after doing what they and their cronies have done, but it'd be start.