I figure if I put a photo of mine from Singapore of a J-Walk book here, people will see it on Google Reader and possibly their iPhone, thus satisfying every part of the title. And people call me stupid, can you believe it? Don't answer that.

Since my posts on Google Reader's new interface and my own subsequent installation of Greasemonkey scripts to make it usable again, I thought I'd share a couple more resources and observations in the hopes they may be useful. If you don't use Google Reader, you could always print out this page on paper and give it to your cat to shred. If you don't have a cat, give it to your chameleon, if you can find him camouflaged somewhere. Everybody's happy.

First observation is the iPhone Google Reader web application. While the new Blazing White with faint blue lines is somewhat less than usable without a few Greasemonkey scripts on the desktop, I think the iPhone Google Reader web application is a marked improvement. The grey gradients on the toolbar and the navigation buttons which never really worked on the iPhone's screen have been replaced by solid colour which makes it much easier to eat, especially when you're outdoors and battling lots of sunlinght.

ASIDE: Did I just say it’s much easier to "eat"? I didn’t mean to type that… but it works doesn’t it? Can’t you just picture someone eating some web feeds with their breakfast? Eating web feeds? Anyone? Okay, I guess I’ll never be a poet after all.

That Google Reader is a very nice site,
Even if the new interface is an absolute blight.
I could even type nonsense in a tree,
But I really, really suck at poetry. 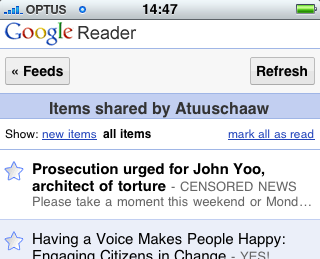 My other observation was that J-Walk recently blogged (J-Walk blogged something? No, really?) about Google Reader and had his own interface modifications to share complete with before and after photos which I assume he took with a very high resolution camera. I mean, those photos of his screen were perfect, no light distortion or anything. I was really impressed.

A few days ago I mentioned that Google made lots of style changes to their Google Reader site. I spent some time and tweaked the styles so it looks much better to me. Most of the stuff I don’t use is hidden, and the overall look is much less cluttered.

I started with the file found here, and then modified it and added my own stuff to it.

If you use Google Reader with Firefox (and have the Stylish add-on installed) you can try out my tweaks. The new styles are in this text file: Google Reader Tweaks. It’s not set up for one-click installation, so you’ll need to create a new style and copy/paste. Or, install this one and replace the code with mine.

I've been reading J-Walk for a long time; I have fond memories of the last few years of high school in 2003-04 and when I got my first full time job in 2004 before I took off to university reading his material. Before my mum passed on I had got her reading it too.

Even if he does suggest you can be productive writing lists in Excel! Oh well, we can't all be Gnumeric list makers :).