A few weeks ago I wrote that while I was keeping my profile active with links so people could find me still, I had decided to give up on Facebook. I was worried that Facebook had just turned into high school and MySpace 2.0, and I was genuinely creeped out by their underhanded advertising tactics. Well according to Wired news ("Koobface" Virus Attacks Facebook), it seems there's another nail to put in it's coffin:

Koobface, which already made the rounds on MySpace, is now worming its way through Facebook. The Koobface virus uses Facebook’s private messaging system to infect computers via a shared video.

Unsuspecting users will see a video link (shared by an infected friend) with the message, “You look just awesome in this new movie.” Click the link will lead you to an outside site where you’re told that you need to download a Flash update, which is actually a virus file. Once the virus is installed, it will try to grab sensitive data off your PC, like credit card numbers.

In a way this a very old virus; it operates much like mass-mailing worms that used to infest Usenet and e-mail lists. But it’s proving an effective tactic on social networks where private messages from friends seem more trustworthy than traditional e-mail, which even the most neophyte web users have come to distrust.

For the time being traditional preventative measures will protect you, ironic considering Facebook was supposed to be the closed, safer alternative in the first place:

The virus watchdog blog for McAfee labs reports that Facebook is aware of the Koobface attack and is already working to remove the spammed links from its system. But with dozens of Koobface variants known to exist, McAfee warns that “the situation is likely to get worse before it gets better.”

In the mean time, the best way to avoid Koobface is to adhere to the tried and true rule of internet safety: never open unexpected e-mail attachments, videos or other links, even if they are from someone you know. 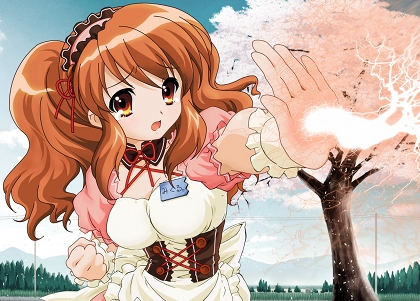 The Mikuru beam… it's not working… again!

Sitting on a Mac with Mac OS X Leopard, FreeBSD and NetBSD I haven't been affected by this, but it does make me even more wary than I was before with dealing with this site. The time when Facebook was a clean and safe alternative to the other major social network sites such as MySpace and Friendster has definitely passed.

I'm really starting to think this kind of thing is the inevitable (and unavoidable) endgame of heavy, generic closed social networks like these. I had a Friendster profile, I had a MySpace profile, I have a Facebook profile… and it's happened to all three. Perhaps I'll just stick to niche services like coffee enthusiast networks and Richard Dawkins' atheist support network! But those are for other posts.

It's also why I'm really, really relieved that Twitter rejected the latest takeover offer from Facebook. I don't know what I would have done with myself had that deal gone through and Facebook owned my Twitter profile. We have spam problems on Twitter, but its manageable and I have some really great friends on it. And it's just not… sleazy? I don't like the word sleazy because it has so much extra baggage, but I can't think of a more apt term at ten past three in the morning!