In October 2007 I wrote a brief post on James Watson's assertion that Africans suffer from economic and social problems because they're somehow genetically inferior. I believe I used the term "codswhallop". Well this afternoon I received an email telling me someone else had commented on it.

Black Africans are inferior because of their forefathers who disrespected God.

I was going to reply with a video of myself rolling on the floor roaring with laughter, but I didn't have time to encode and upload the media to YouTube, so I let the ever so eloquent Stewie Griffin from Family Guy do the talking for me.

Hilarious! Makes me sad I don’t have much time to talk to you. 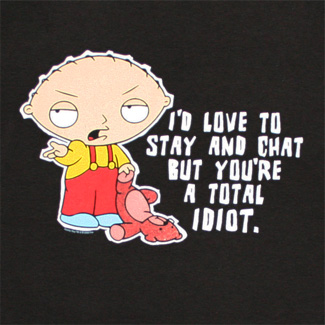 I continue to defend comment systems on internet media against the growing public backlash because I still receive (and read) far more constructive, useful, entertaining and friendly replies than I do negative ones. And besides, the negative ones have such ripe comedic value.