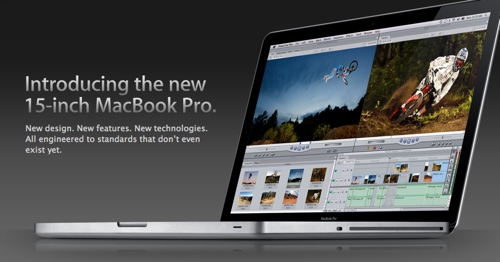 Still not quite there yet…

I haven't talked about this issue for at least several days, so an update is definitely in order. It's not that I'm obsessive, more that I tend to obsess about things. Wait, I did talk about this recently after all. Never mind my ramblings. I never do.

With all my squawking and ruffled feathers over Apple's decision to drop the FireWire 400 ports from their MacBook and MacBook Pro notebook computers, and with my last post talking about why I would love to get a new workhorse to complement my existing small laptop, I've been giving some thought to what Apple would have to release before I would think of upgrading. The thing is, shortly after their latest announcement I was all ready to start planning my next machine, but the more I learn about these the more I'm left thinking I might stick with my original generation early 2006 15 inch MacBook Pro I'm using now for the foreseeable future.

As I said previously, I'd love to get a 17 inch MacBook Pro, but realistically this isn't an option because of the prohibitive price. Unfortunately while faster, the new 15 inch MacBook Pro is simply not attractive enough to upgrade to yet. These are some ideas that I reckon would make a killer MacBook Pro:

0. Quad core processor
My current processor is a 32 bit 2.0GHz Intel Core Duo so really anything would be a great upgrade. What would be great is a quad core Core 2 Duo option which I can turn the cores on and off on easily within OS X using the Processor prefpane. Because I’d be using it mostly as a portable desktop replacement rather than a laptop, the battery life hit would be less important. At the very least a quad core version should be an option, especially considering Snow Leopard’s supposed improved SMB support.
1. Higher physical RAM ceiling
This is the biggest bottleneck with my current system for video encoding and compiling giant projects, it can only support 2.0GiB. The new machines can tentatively support 6.0GiB, but there shouldn’t be any reason why they can’t support 8.0GiB or more. I certainly wouldn’t need that much right now, but I’d like to have the peace of mind that I could add more in the future. I maxed out my current machine way too fast.
2. A higher resolution display with a matte option
The 17 inch MacBook Pro went from having a resolution of 1680×1050 to 1920×1200, but the 15 inch MacBook Pro still only has 1440×900 which is roughly what the line has had since even the PowerBook G4 days. They’re clearly capable of bumping that up. And Apple, please listen to your customers… we want a matte screen option! Please, please, pretty please?
3. More FireWire and USB ports
I know they were both driven by a common bus in the older MacBook Pro, but only having one FireWire 800 port in the new MacBook Pro is a bit measly, and only two USBs is also silly for a so called "pro" machine. It was a bad idea moving the optical drive to the side again because now we have less space. Probably too late to make any changes structurally, but perhaps a few small ribbon cables leading to the other side so we can have a few more ports? I’m fed up with daisy chaining and using hubs.
4. A bundled grilled cheese sandwich maker
Each new MacBook Pro should come with a special extra metal plate so when you’re computer is running hot, you can sit it on top of a cheese sandwich to make a grilled cheese sandwich. This is an absolute no brainer.
5. Blu-Ray burner
Frankly I don’t care about playing Blu-Ray movies, but I would love to burn some backup discs. If Psystar can ship a hackintosh with a Blu-Ray burner, there’s no reason Apple technically can’t.