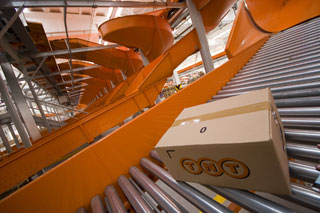 On so called "Black Friday" I finally took the opportunity to buy myself a Kensington backup battery for my iPhone and my 5G iPod. They're both fantastic devices, but playing video on them on long haul flights or using WiFi for several hours when I don't have my laptop is a problem because they burn up so much power so quickly. I'll be talking about it in a later post.

What's worrying me is that I was supposed to have had it delivered today, but according to the TNT Express tracking number page, the parcel is "Late Linehaul Frt Delayed". I assume this means it's late (no, really?) but I haven't the foggiest idea what Linehaul Freight means. Any shipping folks out there know? Does it mean the train carrying the container blew up or something?

At least I know it's in the right city now.