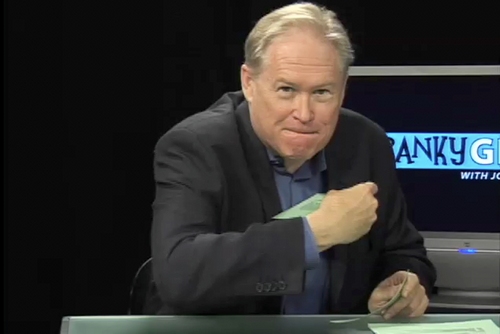 I've always been a huge fan of John C. Dvorak. Ever since I was 7 I was reading PC Magazines and always looked forward to reading his Inside Track and opinion columns, even if my age limited my ability to understand even half of what he was writing. I very often don't agree with what he says, but I revel in his delivery and appreciate his bluntness. There are enough soft and fluffy press releases from companies to pad up several phone books each week, it's good to read someone who can consistently and so poignantly cut through the crap.

Now if only PCMag.com could cut through the crap and create a website that wasn't so awful now that they're giving up on print magazines, we'd be on the right track. And folks, Inside Track worked because the inline headings for each paragraph were in a bold typeface so you could review each point in the column before reading the whole thing; please fix this on the web versions of his columns!

ASIDE: Dvorak started writing Inside Track the same year I was born. Yes, it’s old enough now to start looking for employment and perhaps take up some post graduate studies.

On the multimedia front (ah what a throwback word!) I can remember when I first started listening to this WEEK in TECH because I saw Dvorak's name, I had no idea who Leo Laporte was at that point. Because we moved to Singapore in the mid 1990s we never had CNET TV, so listening to him on TWiT was the first time I heard his voice. His Cranky Geeks webcast with Sebastian Rupley has become my favourite online television programme. Well okay that statement is somewhat misleading seeing as it's the only online television programme I bother watching. Tech5 is insanely useful for when I don't have time to comb through the millions of new news stories every day, and despite some of his listener's vocal opposition to it, I like the cauldron!

As for feedback, on Twitter John C. Dvorak is one of the few well known tech guys who actually replies to messages I send him and he even follows my tweets.

But despite what you may think having read this far, this post was not designed nor intended to brown nose and suck up to John C. Dvorak. I did have a point, and I was going somewhere with this, but it's completely slipped my mind. Damn it this is going to drive me mad! Perhaps I'll just leave it at that. How many bottles of Bordeaux is this worth do you think? :-)