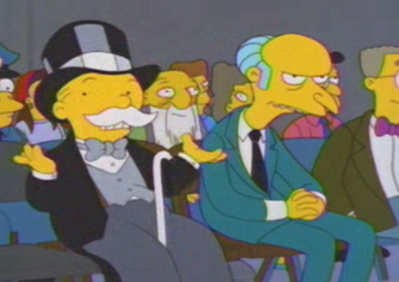 It's official, the Citigroup has become the latest financial institution to receive US federal government assistance. From the CNN International news site:

NEW YORK (CNN) — The U.S. government outlined a massive rescue package for Citigroup early Monday that would inject another $20 billion into the banking giant, shares of which have plunged in the past week.
Banking giant Citigroup has announced it is cutting a further 50,000 staff as the economic crisis worsens.

Banking giant Citigroup has announced it is cutting a further 50,000 staff as the economic crisis worsens.

[…] the U.S. Treasury and the Federal Deposit Insurance Corp. will backstop some losses against more than $300 billion in troubled assets.

I really do feel for the people who've lost their jobs. I've read commentary in my Google Reader feeds that says workers for companies are responsible for their company's actions and that if they don't agree with what the company is doing, they should just quit. Perhaps people in more senior positions have the luxury to consider doing this, but alas for each of these people I know there are scores more who simply can't afford to. There's also a disturbing parallel between this line of reasoning and the idea that you're responsible for your country's actions as well, but I'll leave it at that for now. 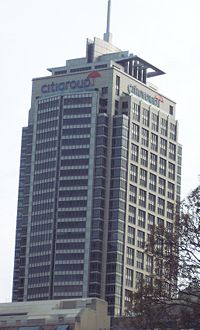 What bothers me about this pattern of bailouts, after bailouts, after bailouts, is that the head honchos and senior management of this latest sinking ship will probably not even receive a slap on the wrist, pay cuts or anything else. I know it's been said by more people and more often than Sarah Palin said "you bet'cha!" and "uuuhhhh….", but it boggles the mind that these gigantic corporations that wouldn't bat an eyelid while clearing a family out of their home when they default on one payment, can be bailed out when — to put it simply — they default on hundreds of thousands of payments.

As an economics student I've learned about the reasoning behind these bailouts and emergency governments investments. By bailing them out, these companies can keep employing people and lending money which allows the economy to continue to function. It's the classic "trickle down" approach where $1 of government investment ends up snowballing into so much more as it is spent, used to buy, spent, used to buy and so on. The problem I have with this rosy line of reasoning is: what's the definition of "continue to function". Was it functioning properly before?

Has this whole experience exposed a flaw in this flavour of capitalism? That such huge and critically important entities are supposed to be run like businesses, but can't be because if they fail the consequences are too dire to contemplate? I'm not arguing we give up capitalism, but clearly letting it run unchecked and shift to fundamentalism like this is just as bad as completely going the other way (oh no, he was going to say "communism"!). Capitalism that screws the average Joe and Jane but that turns into socialism when the companies themselves fail is simply not fair, and it's simply not sustainable.

My other point is, if banks are so central to the health and well being of a productive society, should they really be operated as businesses at all?

In any event, it makes my post complaining about Citibank Australia's misleading advertising look particularly poignant now (Misleading late night Citibank commercials), even if what I was talking about is an insignificant problem by comparison to the problems the banks themselves are facing.

Or is it? Is it time to admit that our current financial system is simply broken, and question why banks are allowed to act like indestructible predators like this in the first place. Is this more of the problem than we realise, or is being reported? Will it be reported by mainstream media any time soon? Will a spade be called a spade? Because last time I checked, a spade ain't a diamond or club, though for the sake of disclosure I must admit I do have terrible myopia.

ASIDE: See, all this bad news is impairing my ability to even tell jokes! Okay, I could barely crack a good joke before, but that’s beside the point. I need a hug. And a grilled cheese sandwich. And a nice hot cup of tea :).