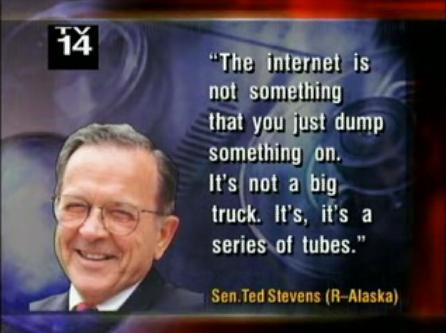 In light of Barack Obama's historic presidential election victory, it's easy to forget other elections have been going on around the world recently, such as in New Zealand. Given my interest in Whole Wheat Radio, the fact I bumped into a couple of people from Alaska in one particular coffee shop in Singapore quite regularly, the fact my dad is interested in Canada next door (thought I'd throw that in), and the fact our neighbours across the street in our rented house in Australia are from Alaska, I've also been watching the Alaskan State Senate elections. Whew, that was a long sentence.

I don't pretend to know the details and inner workings of Alaskan politics, but I know enough about incumbent (or should I say "incompetent") Ted Stevens to know that if he was reelected it would be a crying shame. According to Wikipedia, if he did win he would also be the first convicted felon to be elected to the United States senate.

According to Republican pollster David Dittman in a Huffington Post article (can we trust him?), it looks as though Democrat Mark Begich will take the senate seat:

Alaska-based GOP pollster David Dittman, who worked for Sen. Ted Stevens during this year’s primary race, believes Democratic challenger Mark Begich is all but certain to expand his current razor-thin lead and snatch the seat.

"I don’t think Stevens can come back," Dittman said, noting that he thinks the remaining trove of uncounted ballots will help Begich “increase his lead."

After trying to find other sources of information on this from sites ranging from Swamp Politics to Mark Crispin Miller’s News From Underground, they all seem to be pointing to one Alaskan Daily News article: 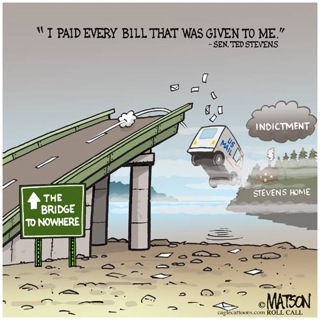 The state Division of Elections tallied about 60,000 absentee, early and questioned ballots from around the state on Wednesday. The ballots broke heavily in the Democrat’s favor, erasing the 3,000-vote lead the Republican Stevens held after election night Nov. 4.

Here's hoping Alaska makes the right choice, just as the United States on the whole did last week. I'm being pessimistic in advance again, but I'd love to have that overturned.