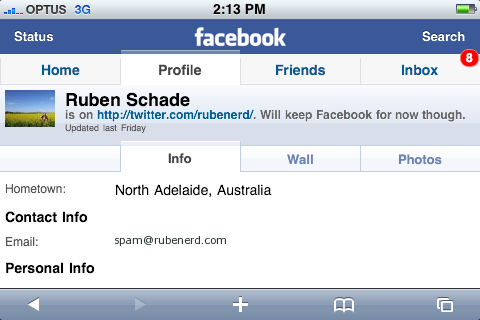 Facebook on my iPhone showing the disposable email address I used to register!

I've been a Facebook user know for just over a year, and I'm about ready to call it quits. What started as a fun and informal way to keep in contact with friends and other people from my Class of 2004 year group has turned instead into high school all over again. And I didn't even like it that much the first time around!

The problem stems from the same blatant showmanship and need to outdo other people as high school, only this time it's through thousands of uploaded photos to prove who has the hottest partner, who drinks the most, who goes to the best clubs, who goes to the most parties, who lives in the best cities and houses… I could go on and on. Reading the Facebook "News Feed" is just too painful to do most of the time. I'm serious!

The number one, ultra über, unquestionable supreme indicator of how "in" you're are though is your friend count. There are people I know who have over a thousand friends. I know there's no way they can keep in regular contact with that many people unless they don't have a job or study and are living off their parents still… I think I just answered my own question. Just like the social circles in high school, it's all rather silly and juvenile when you think about it.

The other problem I have with Facebook is that it's morphed into something over the last two years that I just don't feel like using or maintaining. The new interface is hard to use (though at least their iPhone web app version is still slick), and the constant reminders to install applications (don't get me started on those!) from friends… it's got to the stage where I literally use it just to send private message a small handful of people, that's it. I've stopped adding myself to groups, causes, fan pages, bomb construction projects, the works.

I was going to upload some photos of my own for example, but then I wondered what the point was when I could upload them to Flickr and have the world see them instead of the gated Facebook community that the Googles and Yahoos of the intertubes can't index.

I think this is why Twitter is STILL the only social network I've ever really used seriously. It's a lot more laid back and simple, and allows you to stay connected with friends and people you admire and care about without all the extra baggage and silliness that Facebook or other over the top social networks have. There are people on Twitter who revel in having thousands of followers too, but they're the exception not the norm.

I can't put my finger on it, but it feels like different types of people use Facebook and Twitter, with less overlap than I would have originally expected. I'm following and conversing with people here in Adelaide, back in Singapore and all over the world I've never met before… I certainly wouldn't do that on Facebook, and definitely not on a site such as MySpace. There's something more sincere and honest about Twitter. I look forward to conversing with my Twitter buddies during the day, even some of my extended family and even our Prime Minister has started using it. There is so much less emphasis on showmanship and arrogance, and more on friendly conversation and sharing interesting stories and events as they're happening in people's lives.

I won't be deleting my Facebook profile any time soon, but I think now is the time to change my profile image to a simple box with the URL to my blog, show and Twitter profiles. That way I can still keep a token presence and people can still find me, and those following me can keep one extra person on their über friend counts!

Sent from my iPhone.