Next train arriving in 4 minutes? THAT'S what I miss about Singapore!
Photo from my Flickr Singapore MRT gallery

A few people who's shared items I follow have made comments on this exact issue, but I felt I was going to be posting a lot more than a comment field would allow, so it's going here.

Having used Google Reader again for a few days now, it's made me aware once again of news stories that only make it big in Australia, and those that are repeated by news sources around the world. Along with my tech and personal blog subscriptions, I've also subscribed to ABC News (Australia), AdelaideNow, BBC World, CBC News (Canada), CNN International and Channel News Asia (Singapore). One of the news stories that keeps appearing in all of them is the sorry state of the auto industry.

Now first of all I'd like to make it clear that I think when redundancies occur there are decent, hard working and loyal people who get laid off, and this is a real tragedy. Often we forget that underneath the hugely overpaid CEOs, middle management and other senior positions of transnational corporations, there are hundreds or thousands of other people who perhaps make enough to feed their families. It's a travesty that when companies go under that for the most part senior executives keep all their luxuries when the backbone of their companies — their workers — get left with virtually nothing. This has to change.

With that said, and with all the bleak reports streaming in from the US, Europe and Japan, I'm finding it difficult to feel sad over the declining profits and output of the auto companies. I don't feel sad because such results mean there are less cars being produced, and less therefore being used. In tough economic times people's demands are changing; consumers want smaller cars that use less fuel, that use fuel more efficiently or that use a hybrid system. The real losers in such an economic climate are the environmentally irresponsible cars such as so called "light trucks", 4WDs, SUVs and other TLAs.

I'm 22 years old and I don't have a [car] drivers license. I don't feel ashamed to admit this; in Singapore you definitely don't need a car with the public transport system they have in place, in Adelaide it's a bit more of a struggle but I'm able to commute from our home to the university and to offices in the city using trains and buses. If not, I have the option of using a bicycle, or if worst comes to worst, a scooter. If the distance is less than a few kilometres (or sometimes if it's longer) I'll walk. 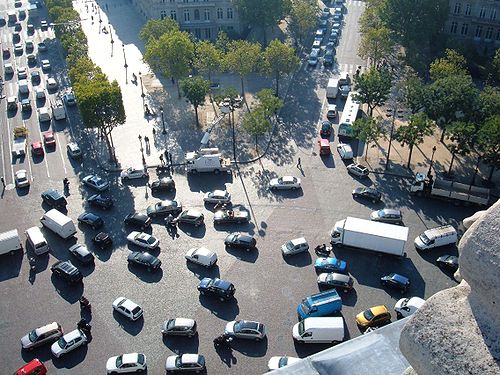 Street traffic in the Place de l'Étoile as seen from the top of the Arc de Triomphe in Paris, France, by BrokenSphere

I think the car symbolises the ultimate human expression of excess. There are many legitimate uses for, and users of, private vehicles, but for every legitimate use I'd say there are dozens of people who have just become lazy and dependent on their cars to take them along distances they could easily walk.

Economists sometimes label downturns in stock prices "corrections". I think in the case of the auto industry, their ridiculous profits and unsustainable (for our planet) production of vehicles definitely warranted a correction.

Let's hope the shortfall will be made up for by increased government investment in public transport options. They're being used more now across the world, let's divert finance from ultra expensive road tunnels and expressways and turn it into more accessible, efficient, reliable and more comfortable public transport. Hope I've done you proud Todd :)