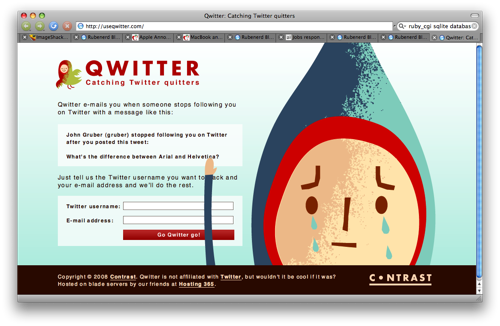 For those who don't use Twitter, the online microblog and simple social networking site, whenever someone starts following your messages because they think you're interesting, you receive an email from Twitter letting you know. Checking who my new followers are has become an unexpectedly happy part of my generally dull morning routine.

Despite my love for Twitter, one feature has been missing the entire time: a notification when a person breaks off and stops following you; arguably I think these notifications would be even more interesting to watch simply so that I could establish my own "revulsion" rate as it were!

Enter Qwitter. Once you've signed up to their service they notify you whenever a person loses interest in you and stops following your messages.

For example, since signing up I've been notified that Marian Call and Shaun Martin have stopped following me. I'm still following you guys if you change your minds… :-(