In a previous post I discussed Apple's new designs for the MacBook and MacBook Pro and how I'm absolutely head over heals in love with the new designs. Despite the obvious advance in their manufacturing process, graphics performance in the Pro and other refinements, their decision to only ship glossy screens has caused a veritable uproar.

If you’re a young women around my age, or a bit older or younger, who society perhaps considers quiet, who enjoys coffee, jazz, anime and/or computers, and who prefers enjoying a glass of wine to bingeing overpriced novelty spirits or beer, don’t think my "love" for these designs is a be-all, end-all situation. :-).

It's my belief though that the removal of the FireWire port entirely from the consumer MacBook machine is even more of a mistake, and could potentially embarrass Apple more than anything else they've ever done.

Firstly we have to put this decision into context. Apple has made no secret of their about-face displeasure with the FireWire 400 port; despite my original iMac, iMac DV and iBook G3 all purchased before 2002 having the ports, the iPod long since stopped support for the port in favour of USB 2.0. This despite the fact FireWire was actually created and marketed by Apple in the first place! 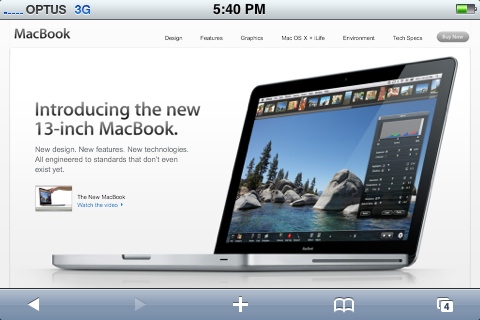 New MacBook homepage from my iPhone this afternoon

We must also remember that Apple has a history of being ahead of the rest of the industry when it comes to shedding legacy ports and components from their computers: the venerable floppy drive, parallel ports, serial ports and waffle irons for example. These ports and devices were on the low end of their respective product lines and could easily be replicated with USB adaptors, and because of USB's higher bandwidth capabilities, little to no performance loss would be incurred as a result.

Actually, all of the new HD camcorders of the past few years use USB 2

Steve Jobs in response to the FireWire 400 MacBook controversy

By comparison, FireWire 400 is not a low end port, the architecture cannot be easily replicated with USB adaptors, and even if it could there would be a performance hit because despite FireWire 400's marginally slower transfer speed on paper, it clearly outperforms USB 2.0 in sustained data transfers. This is why many large external hard drives and camcorders use FireWire, despite Mr Jobs' assertion above.

What's troubling from a publicity standpoint here is the potential mess Apple could find itself in with regards to consumer video. Each Mac they ship proudly comes bundled with iLife which includes iMovie and iDVD; clearly they want consumers to be able to create and edit video. How many buyers of MacBooks will take their shiny new computers home only to realise the camcorder which may or may not have cost them a small fortune isn't even supported by the computer that advertises itself as video friendly? I'd hesitate to say a class action lawsuit would result, but as companies operating in the Internet age know by now (or if they don't they're doomed) is that word of mouth recommendations and complaints can make or break purchasing decisions.

I haven't even addressed the issue regarding Target Disk Mode and what a headache it will be for tech support workers to diagnose and repair problems on these new machines. Suffice to say, I think not including FireWire in the latest MacBook, something which even my iBook G3 from 2002 even has, is a huge mistake. I guess we'll wait and see.

As a disclaimer, I'm a MacBook Pro user because I so desperately need the extra screen real estate and graphics performance, and the latest MacBook Pro retains it's backwards compatible FireWire 800 port, so I'm certainly not complaining simply because I'm afraid I won't have support for my own devices.