ASIDE: Dedicated to my beautiful late mum Debra Ross who’s peaceful, united dream for the world inspired my own.

What I thought I'd do in this post is discuss a concept that some have extremely heartfelt opposition to but which I see would not only be a positive step for the world to take and a natural evolution in our political development, but one which I think should and indeed has to be done given the situation we find ourselves in right now. I'm talking of course about the concept of a world government.

I was going to attempt to explain what a world government would be, but I questioned the necessity of this task given Wikipedia as usual has a far more salient definition: 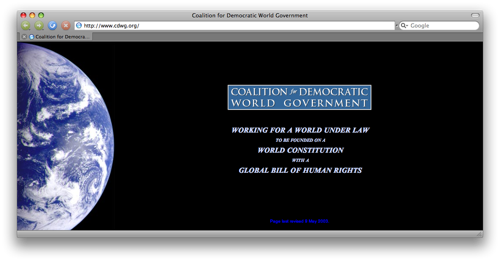 The Coalition for Democratic World Government

In a nutshell, a world government would assume responsibilities currently controlled by nations today for the purpose of working on issues that affects everyone on this planet.

Let that sentence sink in. Read it again. Print it out backwards on A3 paper, stick it to your forehead and look at yourself in the mirror.

The fact is never before in our human history have we had so much at stake and so many issues that affect every single one of us, regardless of where we live. The environment, global climate change, erratic and artificial currency and foreign exchange markets, the exploitation of children, crippling and failing international financial systems, uneven natural resource allocation and distribution, territorial disputes, heartfelt and deadly religious differences… there are too many to list. The point is none of these issues can be resolved by only looking within our own borders.

We have to face the fact that the classical and romantic, yet primitive and primal concept of a "country" where "my people get this land and your people get that land" is not only an antiquated, outdated and creaky system but one that in today's world is fundamentally flawed and broken. You need look no further than inventions like the internet that span the globe or the ridiculous and childish argument being fought over who "owns" lunar real estate to see this.

Now there are those on the one hand who claim that a world government is bad because such a system has never been proven to work before; that it weakens the power countries have over their own domestic affairs; and of course there are the small but vocal minority who claim such an intergovernmental organisation is a sign of a new world order so the illuminati can force everyone to wear matching tracksuits and eat the same kind of grilled cheese sandwiches. One can only think a few hundred years ago of the people using the exact same arguments against the formation of the United States, or a hundred years ago against the federating of states in Canada and Australia. It's funny how people who don't learn from history are doomed to repeat it, isn't it? 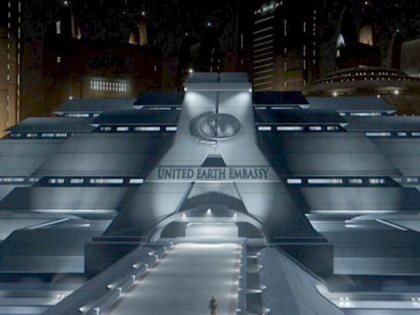 The United Earth Embassy on Vulcan, from the Star Trek franchise

It's high time governments around the world grew up and admit that largely working isolated from each other is not solving our problems, and to surrender some basic and fundamental powers to an independent world government that can oversee, mediate and act on issues that affect everyone and that is in all our interests. Human rights and dignity. Resources. The environment. Information systems. The global economy.

As a third culture kid who has grown up in several countries, holds two passports, a green card for one country and a permanent residency pass for another, who considers nowhere home and who has little desire to own a house because he would be stuck in one place, this is probably easier for me to do, but I encourage you to try it. We need to stop being patriotic towards human invented flags and political borders, and start feeling pride for being Humans and feel pride for our exceedingly beautiful, sacred and precious microscopic orb in this unfathomably gargantuan solar system, galaxy, universe and multiverse.

Because some people might not want to acknowledge it, but our actions now affect everyone. And these cute little country political games we played in the 19th century just aren't going to cut it in the 21st. We need a world government, and we need it now.