Unless you live under an electronic rock, you would have seen Apple released with much fanfare their new designs for their MacBook and MacBook Pro notebook computers. The new designs have certainly generated a lot of controversy, and I'll be addressing some of the concerns here. I'll try not to babble on too much about how I'd love to have one :-).

ASIDE: Apple is often accused of generating more publicity than people can handle or wish to be inundated with, and news agencies and bloggers are often accused of pandering to them by supplying them with free advertising. I’m glad I’m not one of those people.

Both the MacBook and MacBook Pro now share a similar metal design, gone is the plastic on the MacBook and gone is the plastic trim on the MacBook Pro which has been with it since the PowerBook days. The new laptop cases utilise aluminium block construction which entails the shape, port holes and recessed keyboard areas to be cut with precision equipment from a single slab of aluminium. We're being told that this results in a firmer and stronger case that is also more lightweight as a result of using less connectors.

Jonathan Ive (Apple's head of design) hosts an extremely impressive video of the manufacturing process including video of the aluminium rolling along the factory on the Apple website which you can watch. 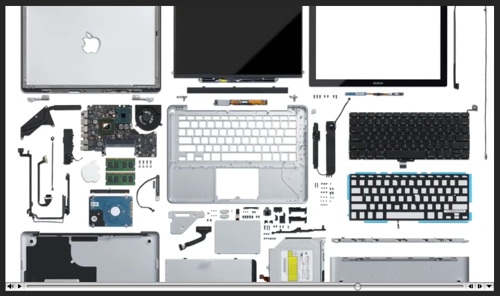 The display is perhaps the most controversial change. Both the MacBook and MacBook Pro now sport glossy displays that match the black bezel design of the current iMac; and just like the current iMac there is no option whatsoever for matte screens.

I use a matte screen original generation MacBook Pro with a glossy screen protector film because gloss works wonders with colour richness and especially improves black tones. However when I'm editing photos I take the glossy film off because I know the colours I see through a glossy film are a much less accurate representation of what the colour will appear as on paper, and on other computer screens. This seems to be the primary reason for the resulting negative comments and uproar over the display: many professional users whom the MacBook Pro targets won't be able to use these laptops. I can't help but wonder if the folks at Apple are really shooting themselves in the foot with this move.

Glare seems to be less of an issue though. While the screen is made of glass and is more reflective than many bathroom mirrors, the brightness is so… bright that it will still be easy enough to read even with other surrounding light sources competing. As someone who uses a glossy screened iPhone outdoors and never has trouble reading what's being displayed, I give credence to this argument, but I'd like to see a MacBook display for myself first before making up my mind.

Seems not many people on MacRumours are impressed!

Aside from these drastic cosmetic changes, arguably the biggest alteration to the MacBook Pro is the inclusion of dual graphics processing units, one dedicated and one on-board. With Snow Leopard's Grand Central function which will let applications use idle processing power on GPUs as well as CPUs this is huge news. It also means the MacBook Pro could really be considered a workstation class graphics machine for mobile users when previously it tended to lag behind offerings from other vendors by a few months. Again I'm holding final judgement until some benchmarks are in.

The other controversy surrounds Apple's changes to the ports on the machine. The ports have been moved from both sides of the case to just the left hand side, and has moved the optical drive from the front to the right hand side. With less space for ports, Apple has introduced another new connector called the Mini DisplayPort which will no doubt result in the need to buy yet another dongle to convert between a mini port and the full sized port for use in this case with external displays.

Sticking with two USB 2.0 ports and the FireWire 800, Apple also removed the FireWire 400 port entirely from both machines. On the MacBook Pro this isn't an issue; the previous MacBook Pro FW800 and FW400 ports shared an internal bus anyway and the FW800 is backwards compatible, meaning if you daisy chain FW800 and FW400 devices off this one port the result in performance will probably be the same. I'll be dedicating an entire post to the boneheaded decision to delete FireWire entirely from the MacBook in another post. New MacBook and MacBook Pro, on my classic MacBook Pro taken at Adelaide Airport. If you look closely you can see a reflection of an airport sign in the centre left of the screen.

Overall despite these minor shortcomings, I'm still really impressed with these new machines, and if anything these introductions only strengthen my belief that Apple is the only non-Japanese computer manufacturer that really puts their heart and soul into each product design. These computers aren't just computers, they're works of art, and I can't wait to get one.. eventually! If you're willing to purchase me a brand new aluminium block MacBook Pro, feel free to post a comment and I'll forward you my address.