Given the sheer volume of work I have to do today, I figured now is as good a time as any to create another rambling Rubenerd Blog post with little substance or meaning. Call it an escape if you will. In this post I'll be discussing Apple notebook hardware.

Of course Apple fanatics already know about this latest news:

Apple is expected to unveil updates to its laptop line next week with the official confirmation issued overnight that it was planning a press event in the US.

The event will be held on October 14 in Cupertino, California, according to an official invite which landed in the inboxes of staff at ZDNet.com.au sister site CNET News.

Not mentioned in the invite is the most persistent rumor about the launch: that at least one of the new systems will hit a price point of US$800.

My venerable, original generation MacBook Pro from 2006 is definitely starting to show it's age, specifically with regards to it's CPU. Firstly, as my primary and only computer here while I study, it chews through large compilation and video editing tasks at a fraction of the speed of my DIY tower back in Singapore. When you schedule tasks to go on overnight so that you don't lose any productivity time you start to wonder whether your machine is up to the task! 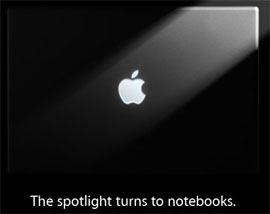 For those of you who remember, the original generation MacBook Pro's were part of the first rollout of new Intel based Apple computers after using PowerPC chips, and for some reason Apple decided to ship them with 32-bit Core Duo chips, despite the even more confusingly named 64bit Core 2 Duo arriving shortly after. This means virtually all Intel based Apple hardware has used and continues to use 64bit chips, fueling speculation that their next OS Snow Leopard will be a purely 64bit Intel deal. It's misleading how they advertise Snow Leopard taking advantage of Intel chips without directly addressing the concern that it will only be 64 bit.

ASIDE: Talk about a guy and his developed world problems! Ooh look at me, my computer isn’t fast enough for what I need it to do!

But then I come to the inevitable question: what would I like to see in the new MacBook Pros? Time for a trusty unordered list: