That poor Sarah Palin just can't catch a break on television it seems, even with all her lipstick, bridges to nowhere, Russia sightings and Joe Sixpacks! The tragic hilarity of her campaign has been a topic of conversation even on the streets of Adelaide thousands of kilometers away: I've heard her name mentioned by people walking around over a dozen times and news reporters have mentioned her in almost every bulletin in the last few weeks.

Even NEWStopia, the ridiculously hilarious satirical news programme on SBS mentioned her this week.

If John F Kennedy had an airport named after him, does that mean if elected Sarah Palin would have one named after her as well? They could call it the… Palindrome! HA! 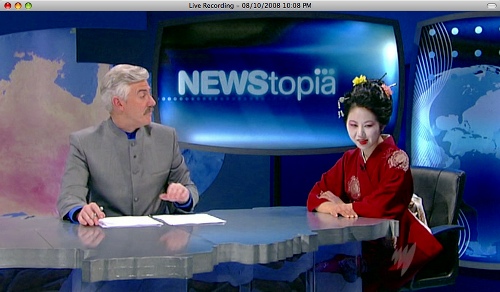 Perhaps the best image though I've seen was one that passed through one of the feeds I monitor in Google Reader. If Palin really is looking out for Joe Sixpack, and she insists on calling Obama's vice presidential nominee Joe, then have at it!