Those who know me outside the realm of the intertubes know that I'm a fairly quiet person who tends to stick to himself. I'm more than happy to just sit in a cafe with my laptop, a frothy cup of coffee and Google Reader and let the outside world disappear, if only for a short while.

Today was different from most. Barely a minute had passed after setting myself up at my favourite table by the window when a mob of people sat at the large table a few metres away. Some definitely were Australians, but I could also hear a few English accents as well. After placing their orders, they turned to each other and started discussing in loud voices why the United States is messed up, is messing up the rest of the world, and how nobody likes them or their country anymore. 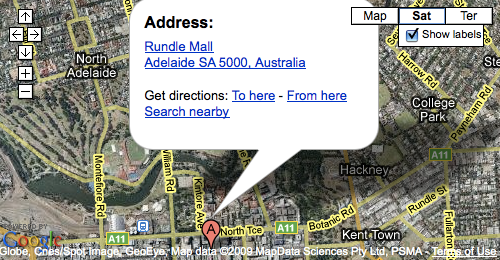 Google Map of the aformentioned coffee shop. Google is an American company!

I'm not an American and I've never been to the United States, but when I heard them talk like this, I felt something I didn't expect: insult!

The sentiment of these caffeine fueled people is certainly not new. Most if not all people I know in Australia, Singapore and Malaysia hate the current Bush administration, their handling of world affairs over the last eight years, their obsession with unfettered and unregulated capitalism that has plunged the western world into such a hole in the last few months, their arrogant sense of entitlement and superiority. It's quite a stretch though I think to then label the entire country with the misdeeds and ineptitude of their government. Silly, nonsensical reports like this from the Australian ABC that claim that America is an empire certainly don't improve the situation.

During one of Barack Obama's campaign rallies they summarised on the evening news here a few weeks ago, he expressed his concern over how the world views the United States and claimed that the world doesn't hate America, they're just bitterly disappointed. While it also troubles me how much religion affects America's political discourse and policy, his comment pretty well summed up my opinion as well. 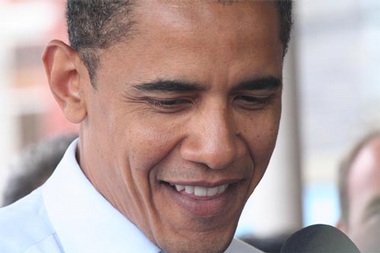 As a 22 year old my bright view of the world I held from my teenage years has certainly faded, but I'm still young and naive enough to think that most people still have the capacity for good, and the United States is certainly no exception. For every disaster like Afghanistan, Iraq and Vietnam I also see countries like South Korea, the Federal Republic of Germany and Japan that were occupied after wars and subsequently helped out to the prosperous countries they are today. I'm not a political analyst so I can't tell you what changed from then to the modern mess America has got itself into around the world now, but I would love to see it go back to what it was before, with the motives they had before.

I guess I felt insulted by the mob's remarks because I have so many American friends; I listen to and enjoy a lot of American music, film and television; I use an Apple computer and fly in American built aeroplanes. While they may have the knack for electing idiots, America also has a disproportionate number of resourceful, creative, intelligent and warm people who's presence on this planet makes us all better off.

This isn't to say there aren't some things that irritate me about Americans. For one thing they can't seem to spell words properly (they love inserting the letter Z into everything and leaving the letter U out), they still use the archaic imperial system despite using decimal currency, the call petrol "gas", they call chips "french fries", they call lollies and sweets "candy", and for some reason that's completely beyond me they think they can do better barbecues than Australians. Ha! Unfortunately as much as I like Americans in general and feel as though the United States has the capability to be a positive force in the world (another Barack Obama-ism), I can't dare say it in public in a place like Australia or even many places in Singapore for fear of being boo-ed at. My father loves Canada and like me also has many Canadian friends, and we can say THAT in public!

If you're an American, help me to help you, please don't vote for the Republicans in your up and coming elections! Vote for Cynthia McKinney [EDIT: Actually, don't vote for her. I assumed because the Aussie greens party are such a positive force that the American one would be too, turns out she supports Robert Mugabe of all people – I admit I was wrong], vote for Barack Obama, vote for an independent, I don't care!

I just want to be able to say I like your people and your country again… without ducking for cover!