It's crunch time: alas after months of neglect and with so many assignments and projects active and being worked on at any one time, my internal 149 gibibyte (aka 160 gigabyte) hard drive has finally been maxed out. Bummer!

Having used Windows, Linux, FreeBSD, NetBSD and Mac OS X on computers with drives that are nearing breaking point, I do appreciate how incredibly stable the BSDs and Mac are under capacity stress. By comparison the general wisdom with Windows (at least when I still exclusively used it before 2003) was that you must reserve at least 10% of your drive at all time to maintain stability, NTFS included. By comparison, this MacBook Pro has been close full for a while now and still only EyeTV and the slow as molasses Microsoft Office 2008 for Mac applications are capable of crashing it.

As I've discovered the hard way though, notebook computers present their own set of storage challenges! For most of my life I've been a desktop computer user; it was only in 2006 when I made the decision as a computer science student studying overseas that a souped up notebook computer would make more sense for taking around to different houses and around campus than a new desktop. 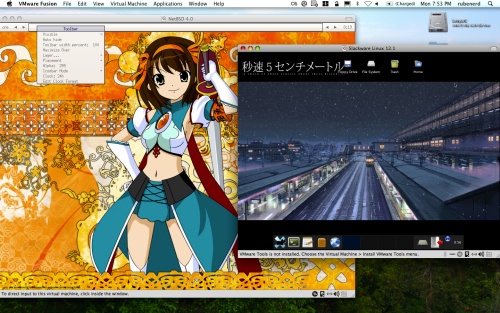 What can I say, I love toying around and exploring operating systems!

This is also a problem for virtual machines which I spend lots of time using and writing about. To satisfy my own addiction and fanaticism for studying operating systems, as well as for my work which involves compiling and testing applications, I have multiple VMs on this internal drive. Running these virtual machines on an external drive is completely out of the question given the performance would really, really suffer. Having 12 virtual machines which combined take up 72GiB on a 149GiB notebook drive though is also completely out of the question!

With my desktops in the past I tended to dedicate a smaller drive with the fastest RPM for the operating system and two larger, equally sized drives mirroring each other (later using RAID instead of software) for the data. On my current desktop back in Singapore which I SSH and SFTP into from here in Adelaide I have FreeBSD 7.0 AMD64 on its own dedicated, 10,000RPM SATAII drive with 32MiB of cache shared with binaries, and two 7,200 RPM drives for the home directories, port collections, documentation and served data. Ideally I'd love to have another super fast drive just for /swap too!

On this laptop I've got everything under the sun on one drive. Perhaps partitioning the drive and assigning the /Users directory to a secondary partition might help to compartmentalise the information and improve performance. On BSD and Linux it's trivial to assign the /home directory to a separate volume, on Mac OS X I'm not so sure. Seems like I have some homework ahead of me! 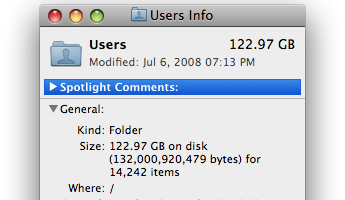 This much taken up… on a 149GiB internal notebook drive.

Of course it probably wouldn't hurt cleaning this drive out either. I have a few Ruby scripts which I run each afternoon which cleans up my desktop and puts files in the appropriate places, but it can't determine what is safe to delete and what isn't. I need an electronic secretary I think. Make someone sign a NDA, then go through my drive and get rid of things. No, wait… perhaps that isn't such a good idea.

As my fabulous father always says after ringing me from his office in Singapore which has more paper, books, phone receivers, emails and blood pressure tablets than Parliament House: "All I need is a time machine Ruben… then I'd work just fine"