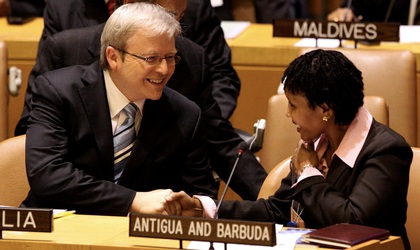 With all the gloom and doom reports coming from across the Pacific in the United States with regards to the Subprime Mortgage Crisis and the string of unavoidable but nonetheless nauseating bailouts we've all heard about by now, it's good to know that our own banking system and financial institutions in Australia are weathering the storm just fine. According to the Business section of The Australian paper and a recent report from the Reserve Bank, we're actually in a relatively sound position:

“[Australia’s] banking system is soundly capitalised, it has only limited exposure to sub-prime related assets, and it continues to record strong profitability and has low levels of problem loans,” it said.

The mostly upbeat report came a day after the International Monetary Fund issued a similar glowing assessment of Australia’s economy, fiscal settings and the resilience of its banks.

The RBA indicated that it, like many others, has been surprised by the extent of the financial crisis now sweeping global markets, but Australia’s banks were set to ride out the worst of it thanks to strong loan books and limited offshore exposures.

Unfortunately as I had suspected the global distrust and fear of banks is having an impact on Australian banks despite solid domestic performance. It's another example of panic eclipsing common sense and actually doing research into companies you're sinking money into.

For all the talk of lax regulations in the United States causing problems, I can't help but think it has to do more with greed and general slackness. Again from the article:

[…] the central bank highlighted a few areas of the financial system hurt by the global turmoil.

Bank bad debt provisioning has risen, but the ratio of banks’ problem loans to total assets remains below the average since the mid-1990s, “a period of unusually low credit losses”, it said.

In line with its recent comments on the economy, the central bank said that household balance sheets were entering a period of consolidation due to tighter financial conditions, but households were still drawing benefits from low unemployment rates and solid incomes growth.

Some stress signals are emerging for the mortgage belt, although these are minor compared to those in the United States.

This of course prompted the relaxing of interest rates from 7.25% to 7.00% earlier this month.

And to end this post, as if I needed an excuse to show something cool from my iPhone, here's a screenshot of the Stocks application showing common indexes: 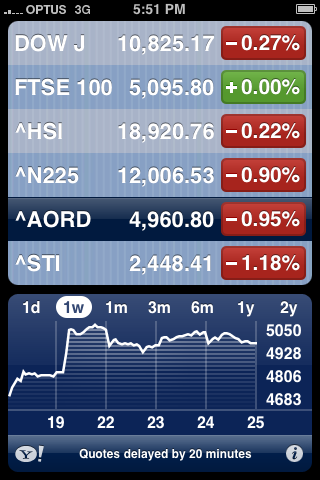