Over the weekend I travelled to central South Australia to see the magnificent Flinders Ranges which will be the subject of an up and coming post. Unfortunately given the timing the trip eclipsed another event that I must admit was less awe inspiring but nonetheless pivotal and important. Why must my introductory paragraphs always be so useless? 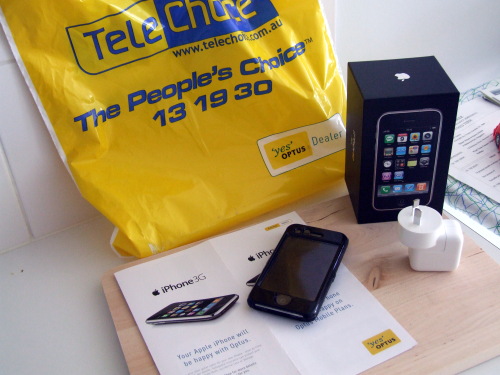 I've had conflicting feelings about the iPhone since it's introduction last year, and even dedicated a previous blog post to explaining why I couldn't own one, not to mention venting my frustration over the number of iPhone posts popping up everywhere, then hypocritically discussed the iPhone being made available in Australia.

Since then the iPhone has been legitimately made available in my home market with the option of unlocking, the iPhone App store has been made available with the new 2.0 software (even if they do seem unnecessarily heavy handed in choosing which software they want to allow) and the Google Android phones, platform and interfaces have failed to impress me on many levels.

Okay okay, I just love Apple hardware design, and the software has obviously been given lots of thought and attention… I admit it, I was won over!

Below is a photo of my iPod evolution from my first 3rd generation 15GB iPod, a 5th generation 60GB video iPod, my 16GB iPhone 3G and my Palm Centro which I'll still be using for overseas SIM cards. They all still work flawlessly, though saying such a thing I'm sure will fix that!

ASIDE: As my fabulous grandfather hailing from northern New South Wales once told me: Stupidity looks bad, but hypocrisy universally looks even worse! I must look pretty bad right now!

I still haven't taken the original plastic protector off the large screen or even the back, though I did get a basic case for it which does make it slightly thicker but I hope will keep it looking better for longer. I tend to carry lots of keys, spare change, hardware, nuclear reactors and other associated material in my pockets and I didn't want my shiny new gadget damaged!

As for the apparently dreaded keyboard, I'm absolutely loving it. The on-screen keyboard does take some getting used to, but after a few days of hunt and pecking, I'm typing on the screen with my thumbs almost the same speed and accuracy as my Centro, my other favourite phone. An unforeseen benefit is how quiet using an on-screen keyboard is; when I was sharing a motel room in the Flinders Rangers with my dad and sister over the weekend I was able to do some light text messaging without waking anyone up. 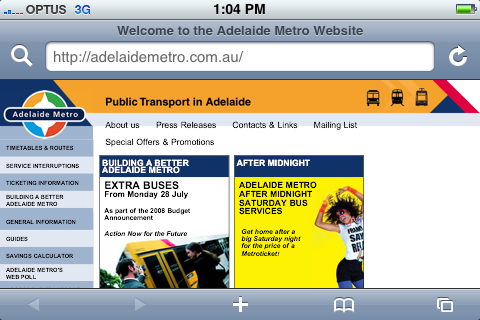 I could spend the next five hours posting more information and stats on the phone itself, but I think it's safe to say the iPhone already has saturated media coverage! Instead, over the next few days I'll post more personal experiences with screenshots, photos etc. The Leo Laporte machine hasn't used the GPS features to find out how to get back to Mawson Lakes from Tea Tree Plaza I'm fairly sure.

I'll end this "part one" post by saying that not since getting my first Palm OS based phone (the Tungsten W)) have I've been so happy with a portable electronic device. You could take the end of that sentence many ways, but I hope you thought of phones.