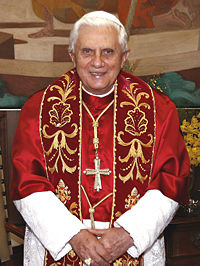 Does anyone else find the Pope slightly disingenuous when he espouses the virtues of living for things other than money and power when he is in a position of great power and is the head of an organisation that doesn't pay taxes?

I got two quite different responses on Twitter, and I replied in two different ways!

And who would they pay taxes to, based on which laws? But there is some irony there, given the treasures held by the Church.
Skydaddy

They would pay taxes on their income to the government, just like everyone else does.
Rubenerd

Of course religions should pay taxes. I have no idea why the don’t. I wonder what the rationale is?
Cameron Reilly

I think the problem is we both expect them to be rational and make sense right? :-D
Rubenerd

The Photo of Pope Benedict XVI was produced by Agência Brasil, a public Brazilian news agency and is licenced under Creative Commons Attribution 2.5 Brazil