It seemed less than 5 years ago after Microsoft's dominance over Netscape that the browser wars were over and innovation was all but dead. What a glorious time to be alive now!

Ah yes the intertubes are all abuzz with Google's release of it's Chrome web browser. As soon as the initial reaction of "oh no, not ANOTHER browser to test documents in!" quickly faded, my curiosity and general love of Google products took over and I went to their website to download the first beta, and to see how it compares with my beloved Camino.

As far I as I can tell given the limited information available (and feel free to corrrect me if I've made a mistake!), Google Chrome is based on Webkit, the rendering engine Apple adopted from the KDE Konqueror project. This is of course the same rendering engine used in Apple's Safari web browser and Nokia's Symbian browser amongst others.

Unfortunately for me, Chrome currently is for Windows only, and it has to be XP or Vista as well; my Windows 2000 virtual machine on my MacBook Pro couldn't even feel the love. Given it is a very early beta that's understandable though, and Google has stated that support for Mac and Linux is in the pipeline. As I'll elaborate further below, whether this means the support of the latter OS and presumably X11 will mean I'll be able to run it on FreeBSD or not will be interesting to see.

I'm going to come right out and admit it now: the user interface of the Chrome browser is just gorgeous. For the first time in a while, I'm ready to admit that another group or company has been able to beat Apple on appearance in a competing software product. Safari and Camino with the UnifyCamino plugin on Mac look swisher than Firefox, but Chrome looks even better! 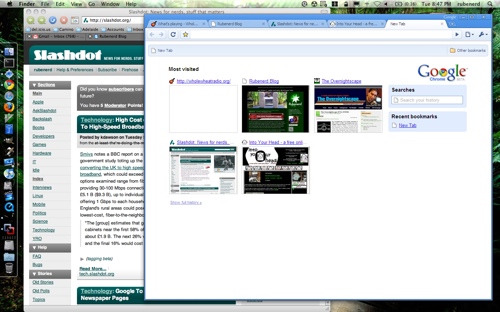 ASIDE: The above image is a shamefully misleading use of the Unity feature of VMware Fusion which allows applications running inside a Windows XP or Vista virtual machine to appear as though they’re running on the Mac desktop.

Chrome uses the same rough layout for the widgets and URL bar as Opera with the tabs positioned at the top. This has always made visual sense to me, because the displayed URL would obviously be different for each tab! In place of a menu bar, the Google folks opted for two discreet buttons on the right hand side which expose lists of options and functions. While I think the layout of these popup menus are a bit on the cluttered side, it's certainly a slicker approach when compared to Internet Explorer 7's cluttered and visually unappealing smorgasbord of widgets beside the tab bar.

This layout style is remarkebly efficient and uses far less screen real estate than Internet Explorer or Mozilla Firefox in their default configurations. Not only that, but it actually looks like a next generation browser compared to Firefox 3.0's dissapointinly old fashioned style, or Interent Explorer 7's horrible layout! The widgets are a bit big though, I'm hoping in the final release there will be an option to scale them down as you can in Firefox, Camino and Safari.

In terms of features it certainly is lacking when compared to Firefox, but then again Phoenix and Firebird lacked features in their early releases too. Whether or not Google allows third party developers to create plugins or whether this will just be a delivery mechanism for Google services will be interesting to see. I'm really looking forward to seeing how they utilise my Google Calendar, Maps and Gmail!

One feautre I think is very swish is the "Incognito" mode, similar to Safari's "Private Browsing" mode in that it stores no information about anything you do in the session once you close it. This means you can browse to sensitive sites with confidence such as internet banking and por… uh… recipie sites for grilled cheese which you don't want others to see.

It will be interesting to see what effect Chrome has on Firefox's still growing market share. Unfortunately a very significant portion of people who run Windows see Interent Explorer as "the internet" and don't even know you can swap it out. People who know enough about browser software probably are using Firefox now, and they're the ones who'll be checking out and using Chrome. Then again, Google has shown time and time again that it's capable of generating interest in it's products outside the core of computer savvy users. Perhaps Firefox will take a hit.

Of course the thing I'll be looking at closely is the licence it will be released under, and specifically the way in which others will be able to access the code. Some sites are reporting that Chrome will be an open source browser, but others I read claim that only the underlying guts of the application will be open source and the interface will be closed, ala Mac OS X. If it's the former, as a FreeBSD user I'd be delighted to compile it for use on my machine if they don't supply native FreeBSD binary downloads, if it's the latter I guess I'd be stuck with using the Linux version with FreeBSD's Linux Compatibility Layer which would be workable, but less than ideal, especially when browsers such as Opera officially support FreeBSD, and Firefox and Konqueror can both be compiled and natively run. 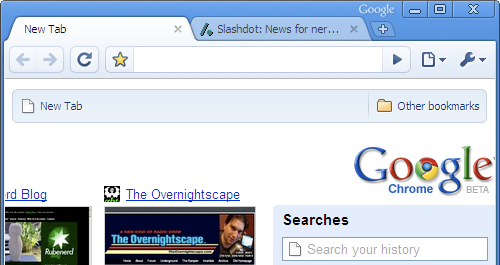 ASIDE: My caesar salad just arrived! I never used to like anchovies; actually I used to HATE anchovies, but now I just can’t get enough of them! What salads have to do with a Google browser I’m not sure, but since when have I let relevency get in the way of what I’m discussing here?

For what it's worth, the first thing I tried with the Windows version of Chrome I downloaded was trying to get it to run under Wine: for those who don't know Wine is a project working towards complete and free implementation of the Windows API so regular Win32 applications can run in Unix-like environments. In FreeBSD 6.3-Stable and NetBSD 4.0 virtual machines on my MacBook Pro it spat out a list of errors relating to drawing elements on the screen from what I could gather; perhaps you Linux folk might have more success. If you've got it running under Wine, I'd love to hear about it!

All in all I'm very interested to see where this Google Chrome whatnot goes. I'm not sure whether I would personally use it as my day to day browser (LONG LIVE CAMINO!) but more software in the browser ecosystem can only be a good thing, especially when it comes to getting people off Internet Explorer. Perhaps Firefox's market share may suffer slightly, but such is the nature of competition, and more is good!