UPDATE: It’s now official: the Reserve Bank of Australia has lowered interest rates by one quarter of a percent.

I know this is supposed to be a technology weblog, but I'm also studying economics and like to keep on top of developments. Does that make me more or less of a loser?

Economists in Australia have been waiting for this day for a long time and we've all been speculating what the Reserve Bank would be doing on said day. Since 2001 the RBA has incrementally increased interest rates to curb Australia's stubborn inflation fueled mostly by domestic demand. While the world has gone through several notable economic corrections and booms over the last decade and a half, Australia hasn't suffered a recession in more than 16 years.

ASIDE: Some attribute this uninterrupted period of growth to the policies of John Howard’s conservative government which was in power until last year when Labor took the reigns again. I’m skeptical!

Back to today's news though, analysts have long predicted an end to this seven years of rate rises with a cut of one quarter of a percent. The leader of the conservative opposition Brendon Nelson wants a double half percent cut, and even went as far as to recommend it to the Reserve Bank, despite acknowledging that he supposedly respects the nonpartisan independence of the RBA and that if he were the prime minister he wouldn't be issuing the advice. Our current PM Kevin Rudd took him to task for the comment with another brilliant speech to parliament, but I have to admit Nelson did set up the pins for Rudd to knock over! 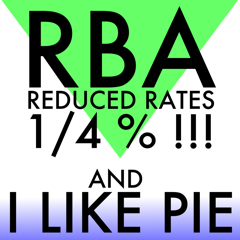 Despite the oil price falling in recent days, overall we're still looking at high levels which have putting pressure on almost all consumer goods prices. Transport costs are through the roof and few manufacturing and service industries have come out unscathed. Much of the inflation in Australia in recent years can be attributed to this relatively inelastic commodity, but according to an ABC News report, even factoring out the oil price inflation is rising, despite an overall drop in August.

I think it's safe to say the Reserve Bank will be very cautious with any adjustments to rates, and that a prediction of a quarter percent drop is feasible. Inflation is still above 4% which is far in excess of the RBA's target band of 2-3%, but consumers are demonstratively finding it harder to make ends meet now even compared with a year ago.

As a direct result, last night the Aussie dollar dropped to below US$0.85 for the first time in a year which will help exporters and improve our terms of trade. For my own selfish purposes, I'm hoping the falling interest rate in Australia will allow me to sell my existing Singapore Dollars for more, given that I got such a lousy return when I arrived here last month!

At this point I feel obligated to say that the Reserve Bank in Australia, just like the Federal Reserve in the United States is part of a worldwide conspiracy to concentrate power into the hands of the Illuminati, a group of people I exposed for their evil in a previous post… uh, yeah!

By using proven techniques such as assuming correlation equals causality, conveniently denouncing the capacity for peer review using the justification that tertiary institutions and councils are controlled by the Illuminati too… wait we still can't prove it. But you'd better believe exactly what we say without question otherwise you're a duped sheeple because the definition of "duped" is the need for evidence before a belief is upheld, right?