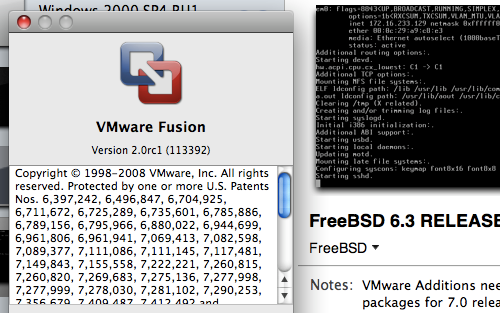 For those who are also avid VMware Fusion users, you'll be pleased to know the first Release Candidate for VMware Fusion 2.0 has been released (build number 113392).

For my own selfish needs, I only had three problems with the last beta which I'm hoping this RC has fixed:

Performace Issues with BSD hosts
Linux distributions performed just fine, but X.org in FreeBSD and Xfree86 in NetBSD on my MacBook Pro with 2GiB of RAM took far longer to load and performed worse than my 200MHz Pentium MMX box with 32 megs. This is not an exaggeration!
Folders that don’t disappear
In an attempt to backup my virtual drives as I like to do on a regular basis, I moved a folder from the virtual Windows 2000 machine to my Leopard desktop. Instead of copying over, the folder vanished from the guest, and didn’t appear on the host! One solid week of work down the toilet!
No stretched resolutions
VMware Fusion 1.x did not stretch the guest’s screen resolution when it was lower than the host’s. This meant in full screen there would generally be black bands on the sides, below and above the guest display… which was just fine for me! The Fusion 2.x betas flipped the default configuration so that it stretches the virtual screen which perhaps is useful for gamers but for reading text on an LCD it looks dreadful! As far as I can tell there’s no way to change this in the GUI, and adding lines to my preferences file turning off GuestToHost does nothing.

I might not have much time to look over these issues fully this evening or tomorrow, but I'll certainly let you know what I find out when I can get back around to it. Stay tuned.

ASIDE: For what it’s worth, I’ve learned my lesson with virtual machine betas: they’re not worth it. Other "beta" products are actually quite usable, but not software like this. In the future I’ll be sticking with the latest stable release, in order to protect my sanity :-)