ASIDE: Every small screenshot in this post is linked to the full sized screenshot in uncompressed PNG format so you can see exactly what I can see. The file sizes are almost 1MiB each, so don’t click if you’re on dialup… unless you have lots of free time!

I claim no ownership over the programming presented in the player itself, I’m merely showing them for the purpose of review.

For some reason I've had really bad luck with computer hardware over the last few years. Faulty external hard drives literally burning out the internal FireWire port on my MacBook Pro, D-Link routers failing more times than I can count on one hand, new batteries barely holding a charge, ExpressCards that only work when they want to, not being able to use a brand new headset… I was starting to think electronic gremlins had it in for me.

I belabor all this to put in context the thrill I felt today when I went to the NextByte Apple store in Rundle Mall, bought myself a USB EyeTV Digital TV tuner, plugged it into my terrestrial antenna, and it worked the instant I plugged it in! They've definitely come a long way from the first TV tuner card I bought back in 2002 that plugged into a PCI slot on my desktop and was more temperamental than I am without coffee! 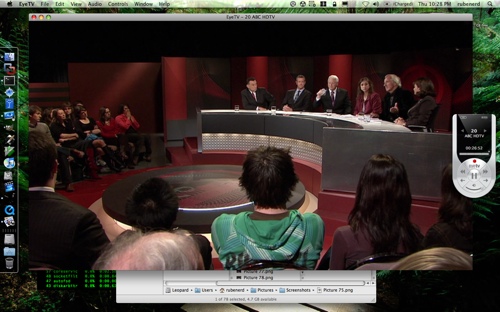 An example of a HD signal compared to the resolution of my MBP. The show is Q & A, a fascinating political debate show on ABC1. They really need a show like this back in Singapore!

For those who haven't seen this device before, the USB EyeTV Digital TV Tuner is a small device barely larger than a regular USB memory key but with a coaxial cable plug on the other side which you plug the cable leading to your antenna into. I bought the most basic version for AUS$120.00 that comes bundled with a small desktop antenna, a USB extention cable for those using a MacBook Air, and the EyeTV software that lets you view shows, make recordings and skip advertisements.

There are many different models with different capabilities; there are dual signal switching versions which will pick the best signal out of two inputs in realtime (useful for in cars I've been told) and there's even a so-called Deluxe version which comes with a fancier annena and other goodies. Both of these also let you record a channel which watching another, but I didn't feel I really needed this, or that the extra cost justified it.

After dragging the EyeTV.app application over to my /Applications folder and launching it for the first time I was presented with a setup wizard that told me to plug the antenna into the EyeTV device, then plug the device itself into the Mac. Then it was simply a matter of scanning for the digital versions of all the free-to-air Aussie channels, and then I was watching them. The whole process took less than 10 minutes! 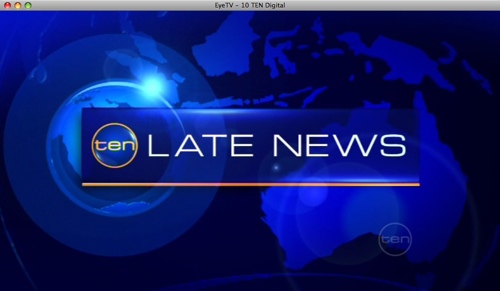 An example of a regular digital TV signal showing the quality of the graphics on the commercial Channel 10. Don't worry, I watch SBS World News and ABC News!

When I bought the EyeTV tuner I knew I'd be plugging it into the terrestrial antenna, so I went to Dick Smith (for my American readers, it's basically like Radio Shack) at the Myer Centre in Rundle Mall and purchased a shielded coaxial cable for $12. I thought I'd humour myself by plugging in the bundled antenna and trying it out first, but it couldn't find any channels at all. Plugged into the wall, I got perfect, 100% reception and distortian free images for all the digital versions of the free to air Aussie networks, including all the High Definition channels. Very nice!

The picture quality is ridiculously good! While the regular digital TV pictures come through and take up a sizable part of my MacBook Pro's 1440×900 resolution screen, the high definition versions take up almost the entire screen! Of course you can make them full screen which I'm sure would work great with an external second monitor, but for me I just get a kick out of watching Huey's Cooking Adventures on my Mac desktop! 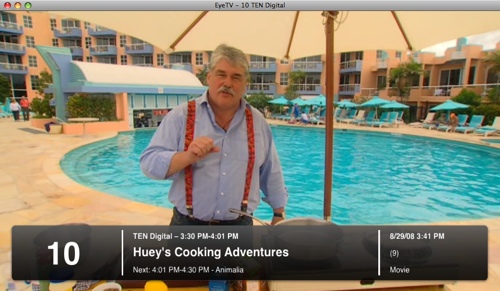 One of the shows I really missed when I lived in Singapore was Huey's Cooking Adventures! Go Huey!!!

Recording shows is also a snap. As I said before the basic version that I bought doesn't have the capability of viewing other channels while you're recording, but the recordings it generates are indistinguishable from the original! Unfortunately the output is a .eyetv file which has to be played in the EyeTV application, but you can easily export to QuickTime or even sizes for your iPod.

The only thing that I don't like about the EyeTV software itself is that it uses the American Month/Day/Year format instead of the International Day/Month/Year format. I can tell that 08/29/2008 actually means 29/08/2008 because there isn't a 29th month, but I'm worried it might get a bit ambiguous and confusing when it comes to 02/03/2010 or something similar! 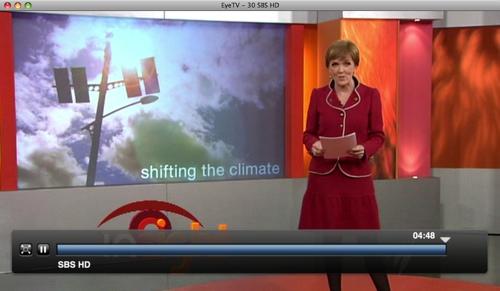 Screenshot from the HD signal from SBS, Australia's multicultural station that plays shows, news and movies in foerign languages, as well as local Australian debate shows like Insight. ABC and SBS kick arse over the commercial stations by the way, except for Huey of course ;-).

ASIDE: For what it’s worth, on my sites and on my computers I always use Year.Month.Day to clear up all ambiguity, and so that the computer can sort them properly!

I was going to discuss the different high definition channels that the EyeTV can pick up in Adelaide and what has changed since 2005 when I was hear last, but I've decided to leave that for another post. I'll add the URL here once I've finished it.

The final verdict? TV tuners have come a long way! If you have a modern Mac with at least a G5 or Intel processor and want a quick, easy and affordable way to watch terrestrial TV channels, absolutely look no further! Aside from the date problem and the proprietary recording format which you need to convert from, it's perfect! Four and a half stars :-).