Quite often I find myself using a particular application for a long time, and only realising that something I'm doing can be done a lot simpler, or even automatically. A quick smack on the head with the palm of my hand and a few shots of espresso is generally called for, followed by implementing the previously unused feature.

In this case it's a feature of the improved and vastly more usable new Terminal.app bundled with Mac OS X Leopard. In earlier versions of OS X I used mrxvt in X11 for most of my shell goodness; a less elegant alternative to iTerm but one which I found more reliable. Unlike previous Terminal.app versions, mrxvt had a tabbed interface, and exited automatically whenever the process you were working on finished cleanly. I knew Terminal.app in Leopard had the former feature but not the latter… despite it being right under my nose the whole time.

The Leopard Terminal indicating a process has been completed, with the window still open

To get the Leopard Terminal.app to automatically close its window when the process you're working on finishes cleanly:

Now whenever a process you've initiated finishes, or if you type exit in your shell, the window closes automatically. When you have tens of tabs open at once, this saves a LOT of time! 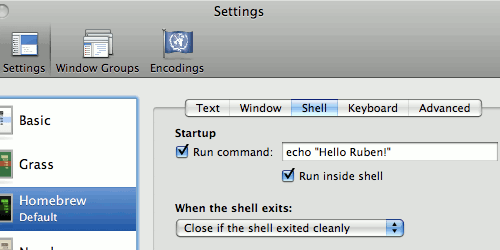