It is with a heavy heart and solemn, somewhat slower key strokes as I sit here using the public WiFi in the city that I inform all those who don't yet know that Starbucks is closing all their stores in South Australia. Stores are also closing in other states, but according to the Adelaide Advertiser paper I read yesterday you'll still be able to get your bucky goodness in Melbourne, Sydney and Brisbane. My last haul from the Starbucks in Rundle Mall.

As I said in a previous pro-Starbucks, pro-Ikea post, I know it's definitely not politically correct to admit you like a transnational corporation, but for me they've always been more than just an overpriced foreign coffee shop with swish little brown paper cup holders.

The Starbucks in the Paragon Shopping Centre in Singapore was my late mum's and my refuge after she finished her chemotherapy every few days; we'd split a cheesecake and drink our Americanos in those giant soft lounge chairs and talk about the most esoteric, philosophical and downright silly things for hours. It was the few hours before the chemo and pain set back in, and she still had the energy to make playful jabs and zings. I'm not sure if I ever told her how much those outings meant to me before she passed on, but I do know that whenever I enter any one of their stores a wave of familiarity passes over me and I feel as though she could be there somewhere, somehow. Ridiculous I know, but there it is.

Back to Adelaide, I can remember when the Rundle Mall outlet of Starbucks first opened. It was 2006 and I had been studying here for a year already, and I was so excited. Starbucks was such a big part of my life in Singapore and Malaysia, and to be able to walk down possibly the greatest shopping street in Australia with a Caramel Macchiato prepared the same way I asked for it in those other aforementioned places was just fantastic. It's ironic that an American multinational actually reminds me of my homes in Asia and not the other way around!

My sister Elke and I went to the store today for their final day of trading, and all the Starbucks branded cups with "Adelaide" printed on them were understandably all gone. I'm glad I was able to buy and keep one back when they first opened! I got a Venti Caramel Macchiato, no skim milk this time. Also picked up a box of Tazo Green Tea, if you're in a place with a Starbucks (still!) try one out, they really make some fantastic cuppas. They were also handing out postcards thanking everyone here for their patronage over the last few years:

We would like to thank all of out customers for your commitment and dedication to all our stores over the past eight years and we are sad to say this store will be closing. 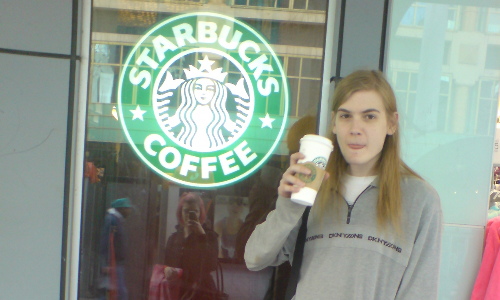 To top it off, Elke took a terribly unflattering photo of me standing outside the Rundle Mall outlet next to their sign, on their last day. Why she couldn't wait until I wasn't making a silly face I have no idea! Cheerio Starbucks, was nice to have you here while you were here. Guess I'll have to wait till my next trip to Melbourne again, just like I used to.