I've had web sites in various forms since mid 1997, but only recently it seems I've started to be affected by an infamous admin internet scourge which probably is almost as old as the graphical internet itself: image hotlinking.

ASIDE: For what it’s worth, Hotlink was the pre-paid mobile phone service I used when I lived in Malaysia. Despite the name, it has little to do with web servers, and given their spotty coverage outside the Klang Valley it doesn’t really do much "linking" either!

Hotlinking of course is embedding media on your own web page that resides on someone else's server instead of your own, without their permission. The problem is each time someone accesses such a page, it adds to the load on your servers as well as theirs. When you're a uni student who can't afford web hosting plans with gigantic bandwidth limits, this becomes somewhat of a problem! 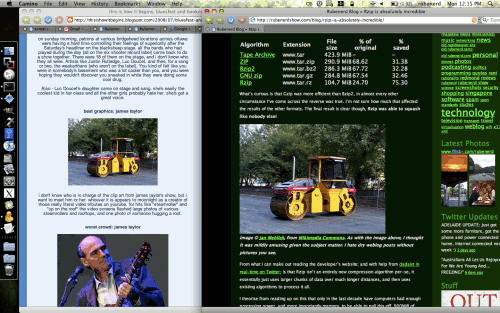 For now I've put up with people linking media from my site because I figure anything that has my domain attached to it is free advertising… right? And I guess I've felt flattered in the past that people have thought my material was useful enough to include, not to mention happy that so much of my material is now showing up on searches. Searches rhymes with peaches. Wait, no it doesn't.

If you have a medium to high traffic website, how do you cope with people hotlinking your stuff? I certainly don't want to implement a blanket ban that blocks everything because users who wish their name was Howard Jamieson aren't causing any harm, but on the other hand I get the feeling this problem will only get worse with time. By far the biggest drain in terms of raw megabytes downloaded are the MP3s for the Rubenerd Show which reside on the same domain and web host, but hotlinked images from here are starting to amount to something.

For what it's worth, as a common courtesy whenever I'm presenting media such as a picture of the very talented (and no doubt more acclimatised to the cold than I am!) David Francey from Whole Wheat Radio, I upload a copy to my server and link to the page containing the original, not the file itself. That way, if someone is interested they can look it up but otherwise I'm not hammering WWR's servers with requests which wouldn't translate into visitors. 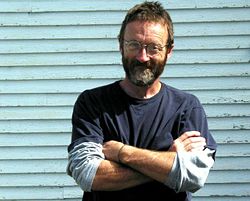 I miss the WWR streams. Playing ripped CDs in iTunes that I bought from it replicates some of the experience now that I have over 120 songs, but it still isn't the same. Hotlinking is nothing like listening to the WWR streams either. Chuck Peddle.