Slashdot is a fantastic tech news website not necessarily for TFAs that they summarise and present, but for the phone book length pages of comments. I generally skim and read the more interesting quips, but I do post comments of my own from time to time if I feel I have something to contribute; if someone's made a mistake I'm not the one who posts "Eeeeeeerrrrr, ur an idiot".

Unfortunately one person posting this evening on the article Should the Linux Desktop Be "Pure?" certainly deserved the aforementioned comment sent to him. Multiple times. Snail mailed, emailed, carrier pidgin-ed, sky written, stapled to his face if I had the choice.

To put the message in context, this was the comment above it in the stream by Loganrapp:

Hey, stop talking like this is a great and epic struggle.
Zimbabwe is a great struggle. We’re just talking about computer operating systems.

While I believe open standards and free and open source software have the potential to do tremendous good and revolutionise the world in so many ways, I do agree with this guy: what we’re sacrificing with closed standards and software is nothing compared to the struggles of Zimbabwe and her people.

It seems this view is not shared by Jah-Wren Ryel though. When I read this comment, I felt like putting my fist through the computer screen.

No, you are wrong.

Zimbabwe is currently playing out a story that the earth has seen thousands of times in all corners. Each time it plays out, it only effects a small group of people. Sure it effects them drastically, but in the big picture its nothing new and does not have much of an impact beyond Zimbabwe’s neighbors.

On the other hand, the current OS monopoly on the desktop affects hundreds of millions, maybe even more than a billion people world-wide across all countries. And in a more general sense, the “freedom vs control” of information conflict that this is a part of affects the destiny of the entire human race.

Just because the issues are more abstract with less of an obvious impact does not mean they are less important. To dismiss them in that way would be kind of like the farmers in the 13 colonies complaining that those dolts at that constitutional convention have their heads’ up their asses, they ought to be doing something about this season’s drought instead of blowing so much hot air around.

For some reason Slashdot’s server wasn’t letting me post my reply, so to help me feel at least a bit better I’ve posted what I intended to say below. Normally I like to remain upbeat in my replies to rude people and assume good intentions, because not only do I find it a nicer and more civilised thing to do, but in many cases helps to draw up a more meaningful conversation than one that just ends up falling into a name calling session. This post I took the gloves off:

Normally I like to think of myself as a good net citizen: I don’t abbreviate words, I form full sentences, and when replying to polarizing messages I try my best to assume good intentions. I’m going to break away from doing this for your message, because to be blunt, you’re completely full of shit.

Trivializing what the people in Zimbabwe are going through right now is, to use the most polite word I can think of right now, disgusting. I don’t care how you rationalise it by saying that it’s a repeated story throughout human history, the people of Zimbabwe (and many, many, many other countries) are going through absolute hell right now and they don’t need a rich person in the developed world thousands of kilometers away who can afford a computer, food and shelter saying that they’re struggles to stay alive and raise children under a brutal government are less important than a damned operating system.

I tell you what Jah-Wren Ryel, grow a pair and you make your way down to Zimbabwe right now, live how the people are living there now, then come back to me and talk about why the great software struggle is more important. Until then, shut your closed-minded, arrogant mouth and stop spouting garbage.

My other concern is that people seem to feel the need to say that "one issue" is more important than "the other issue" when they’re either mutually exclusive or might as well be. The dignity of the Zimbabwean people doesn’t need to be trampled to make a case for free software.

What bothers me even more though is that this jackass was actually given "+5 Interesting" in moderation points, when the poster above him who made the initial comment was only given a "+4".

I am so absolutely disillusioned with people in my own industry and with humans in general right now. 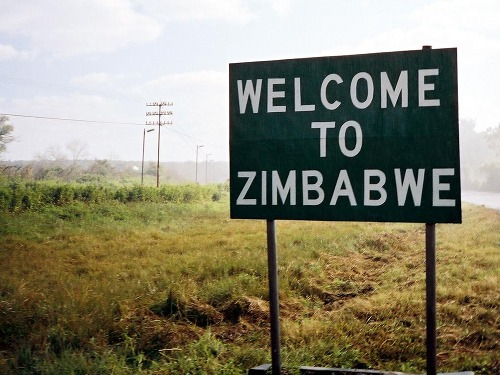 Welcome to Zimbabwe sign, by the writer of the Esibayeni Diaries