Despite WordPress assigning this post as p1198, this is in fact the 777th post! Yes, it's time for another one of our really hated loved Useless Rubenerd Blog Milestones! 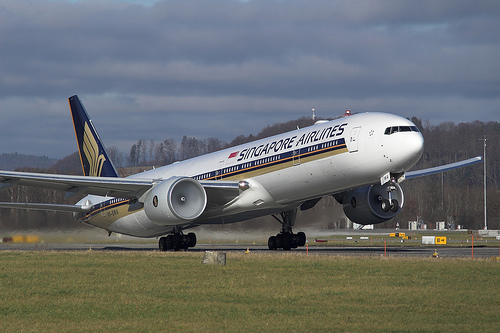 Despite the name "Boeing 777", the Boeing 777 was designed by Boeing Commercial Airplanes in response to the then large capacity gap between the 767-300ER and the 747-400. The 777 is currently the world's largest twin engined commercial airliner; in laymen's terms this means its the largest commercial airliner to have more than 2 full-sized engines, but less than 4. It can carry between 283 and 368 passengers in a three-class configuration and has a top range of 17,500 kilometres, or 6,890,314,960.63 inches for those who use the Imperial system.

The Boeing 777 was the first airliner to be fully designed on a computer; despite this a smaller ratio of airframes have been involved in catastrophic crashes as compared to other airliners currently flying. In another departure (pun intended) from traditional design, eight airlines were directly involved from the beginning of the project (Cathay Pacific, American, Delta, All Nippon Airways, British Airways, Japan Airlines, Qantas, and United).

The latest generation 777s use the world's largest diameter (3.25m) and most powerful turbofan engines currently avaliable: the General Electric GE90-115B. To get an idea of how gigantic these engines are, take a look at this classic Boeing 747 which has been retrofitted with a GE90 (inner) compared to the original engine (outer):

You can find out more about the Boeing 777 at their official website.