First of all I want to congratulate everyone over at Mozilla for the stellar and record breaking release of Firefox 3. Back when I was a Windows user I was an avid user of Phoenix (the original name) and eagerly awaited with almost fanatical excitement when newer beta releases were released. I'm extremely pleased that there is such a vibrant, usable, free and open source alternative to commercial web browsers on so many different platforms, especially Internet Explorer. 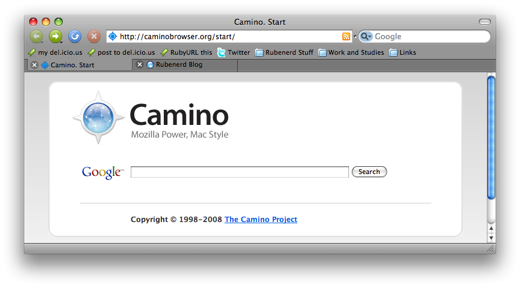 All this said though, and after upgrading Firefox to version 3 on my MacBook Pro this morning, I'm still typing this entry using Camino. Camino is a free, open source web browser for Mac OS X that uses the same Gecko rendering engine that Firefox does. As usual Wikipedia provides the most succinct description for the software for those who don't know what the heck I'm talking about:

In heindsight, that Wikipedia quote really didn't add much to my own initial explanation. Mental note: don't add superfluous and useless quotes to weblog posts any more.

It's probably more to do with me being set in my ways or preferring to use what I'm most used to, but Camino to me still provides the best Mac web browsing experience, full stop. This isn't to say I haven't been tempted by other offerings. In my /Applications folder I can count no less than eight web browsers including Camino, Shiira, Safari, Konqeuror, Mozilla Firefox, SeaMonkey (I still see if it can replace Thunderbird, but it doesn't… for another post) and the PowerPC version of Internet Explorer, for testing how my sites render. 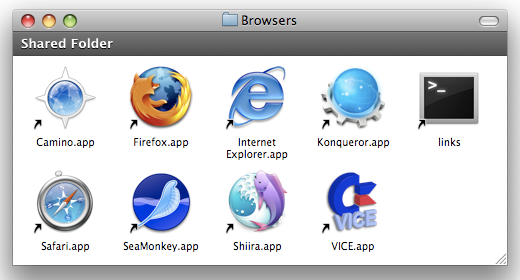 If you use VICE with a virtual VICMODEM it would count right?

What makes me keep coming back for more Caminoish goodness is… it's good for me. I'm serious, I don't rip any hair out of my head when I use Camino. That's a big plus in my book. For me it also excels in several critical areas:

Interface
Camino, like Safari and Shiira uses Mac OS X’s native Aqua GUI framework instead of Mozilla’s XUL to draw the elements on the screen (save for the textboxes). This means it works like a Mac application, feels like a Mac application and has all the interface cues we’re used to… because it is a real Mac application! Firefox may have Mac-like skins available, but it does show through that it’s been hacked together in many places, such as the tab bar, preference panes and window controls.
Loading time
Again because it uses Aqua and is a smaller executable, Camino loads with just a few "dock bounces" on my iBook G3 and my original generation Core Duo MacBook Pro compared to the 7-12 bounces to load Firefox each time. I’ve read it argued that Camino loads faster because it’s simply less extensible than Firefox with plugins, but with my version of Camino absolutely loaded with plugins and add-ons from PimpMyCamino.com I question how much that latter reason can really be relied upon as an explanation for performance.
Integration
As I discovered in an earlier post, Camino uses Mac OS X’s keychain to store your passwords, in the same way Safari does. According to the Camino site it also uses the native Mac Bonjour system to discover bookmarks, though I haven’t ever needed to use that feature.
Icon
Camino has the most slick web browser icon (view the image I posted above). This is a critical point and one which must not be ignored for it speaks not only for… ah I can’t pull it off.

All this isn't to say that Camino is perfect for everyone or isn't without faults, but from my experience it's still the best darn Mac browser. I know I've said this numerous times already; it shows how much I believe it to be true.