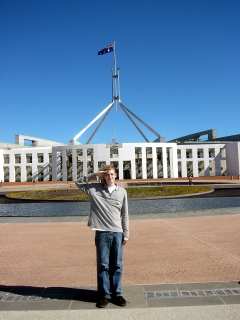 According to a press release from Vodafone, the iPhone will be made available for Aussies "later this year" along with a dozen or so other locations:

Vodafone today announced it has signed an agreement with Apple to sell the iPhone in ten of its markets around the globe. Later this year, Vodafone customers in Australia, the Czech Republic, Egypt, Greece, Italy, India, Portugal, New Zealand, South Africa and Turkey will be able to purchase the iPhone for use on the Vodafone network.

While I've been a very happy Aussie Vodafone customer for a while now, I'm just glad and infintely relieved that Telstra won't be the exclusive distributor! I know they'd figure out a way to stuff it up if given the chance.

If they sell them unlocked, I'll be able to use it in Singapore too :).