I have so many external hard disks, over time it became infeasible to have them all connected to regular local ports (if by infeasible I mean impossible!), so as of late I've been accumulating network drives. With gigabit switches, proper category 6 Ethernet cables and gigabit enabled drives the speeds are surprisingly good.

The problem is in it's default configuration, Mac OS X Leopard doesn't display network mounted devices on the desktop along with your other drives. As someone who uses the icons on his desktop to keep track of what his machine is connected to, it can be very confusing! 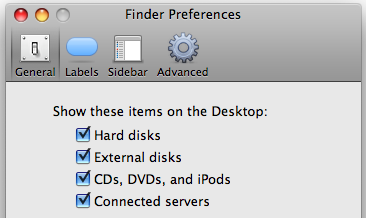 Low and behold, all the network drives you have mounted appear on the desktop, complete with the new cute little hand holding icons: 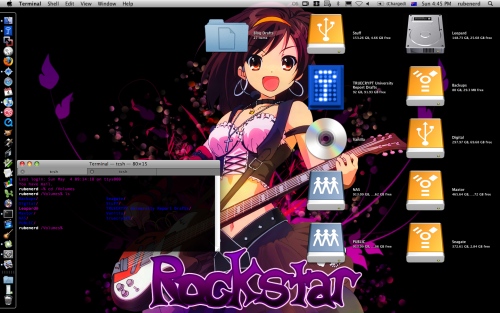 As you can see, the mounted network volumes shown in the Terminal window are now being mapped on the desktop automagically. Which brings up an inevitable security question: do I always have my icons that big? Heavens no, it's just so you can see the icons more clearly! In fact I usually have my icons at a paltry 48px (that is small by KDE and Mac OS X standards!).

ASIDE: I refer specifically to Leopard hiding network drives on the desktop because I started using network drives after I upgraded to Tiger, so I haven’t ever used them with earlier versions of OS X. They might be in the same boat.