If I believed in a God, omniscient deity or the Flying Spaghetti Monster, I'd be thanking him, her or it right now because it seems Microsoft has backed out of their plan to purchase Yahoo! According to Yahoo News (I trust they have their facts straight about themselves!), the end of Steve Ballmer's letter to Jerry Yang at Yahoo stated that: 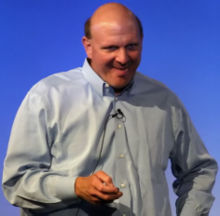 After my initial overjoyed excitement died down though, I started thinking rationally again. Given Microsoft's many, many shady and dubious dealings in the past and their general disregard for business ethics I can't help but think they're going to try something else. Perhaps they're hoping Yahoo will continue to lose market share in search and buy them in a year or so when they're valued for less. Perhaps they've started buying off board directors in the hopes that their nagging will eventually drive Jerry Yang insane and will force him to ask Microsoft if the offer can still be accepted.

Plus, what ever happed to this?

I am really pleased that my Flickr, del.icio.us and Yahoo OpenID accounts are all safe after all, though I'm still being cautiously optimistic. Then again coming from a pessimist when it comes to such business deals, that's probably high praise from me!