Looking at my site statistics I've discovered that this humble weblog's web feed has close to 4x the number of unique IP address hits than the Rubenerd Show's podcast feed. That has really taken me by surprise! And here I was thinking that the Show was the only thing keeping this site interesting, and all the boring stuff would go on the Blog. Perhaps I need to adjust my priorities!

I've also broken my previous record for bandwidth used, this domain has crunched through 14.3 gigs in one week! That's probably loose change for most people, but for me it's a big deal! (Obviously today's stats are much lower because the day is only half over, but you get the idea).

The countries table surprised me even more! The percentage of people from the States has increased even further, and France is now number 3 with almost twice as many as Singaporeans! Now obviously these stats aren't 100% reliable given some people's usage of proxies, onion routing and whatnot, but it's still fascinating! 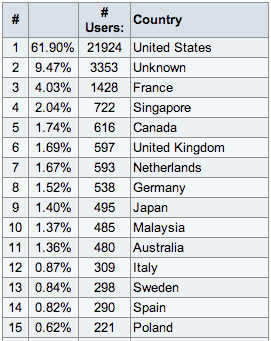 What I'm entertaining as some sort of conspiracy though above all else: punching all these numbers into Gnumeric and creating a rough doughnut chart, rotating it 270 degrees and adding the right colour for the main segment creates an image that looks suspiciously like the logo for the late Commodore Business Machines corporation: 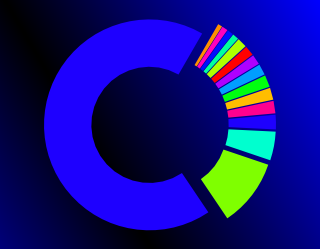 Which then brings up the inevitable question: is a part of a doughnut chart called a segment like a pie chart? Or would it be a bite? Or a byte? Or a Homer Simpson?