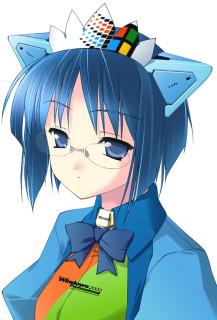 In this second post in my unintended short series on how to use Windows 2000 in a virtual machine (for pesky software you can't run under Wine on your efficient Unix-like machine or your beautiful Mac), I'm looking specifically at security software. If you use Windows all the time you probably already know about these, this is specifically for people who don't really use Windows unless absolutely necessary!

Service Pack 4 Network Installer
This absolutely goes without saying! I much prefer downloading the so-called Network Installer and running it separately, that way if in the future you need to re-apply it or even install it on another system you don’t have to download files again.
Rollup Update 1
Download and run this after you install Service Pack 4, and you’ll get all the updates that were released up to September 2005. You’ll still have a lot more patches to install when you run Windows Update afterwards, it bit will go much faster.
Avast Antivirus or AVG Antivirus
Both of these freeware virus scanners are world class, fast, lightweight and miles better than any of the really expensive utilties such as Norton. AVG uses less system resources, but I like the way you can set Avast to update itself and its definitions automatically. Up to you, they’re both fantastic. My only suggestion if you choose Avast would be to uncheck the "Skins" feature in the installer, the normal interface is the best.
Spybot – Search and Destroy
I’ve always preferred it to Lavasoft’s AdAware; I’m not sure whether it’s the cute message to his wife in the installer, or its no-nonsense interface :-). The latest versions even include a feature called TeaTimer which runs in your system tray and warns you when any application is attempting to edit the registry, very nice!
TrueCrypt
A very slick and easy way to create encrypted virtual folders, or you can use it to encrypt your entire drive, on the fly. According to some basic benchmarking by Steve Gibson on the Security Now podcast/audio magazine/New Time Radio programme, the latter method in fact even makes your drive perform better than without it! If you’re running Windows 2000 within a virtual machine on Mac OS X it provides a great way to secure your virtual disk image without having to keep it within an encrypted DMG image as I used to do. And it’s Free and Open Source!
GRC freeware tools
If you’d rather not poke around and change registry settings or hidden system files yourself, Steve Gibson has bucket loads of freeware software tools that can do more things than I have time to post here. Most of them can be downloaded, used once and archived, no need to install which is nice. 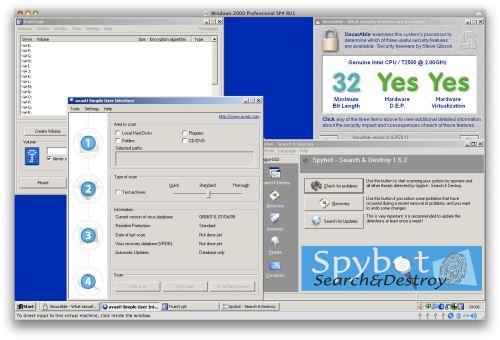