On April fools day I had noticed many people on Twitter were saying how they hated news stores and blog posts that were blatantly fabricated in a vein attempt to be funny. As I never like to irritate people, especially with fake blog entries, I tried my hand at posting a fake blog entry review of Windows Vista. Dave Wares and Sharon in Singapore saw right through me, but I did get one serious post!

Anyway to make amends and restitution for that post that made me feel downright ill after reading, I thought I'd post a screenshot and a brief summary of the only remaining Windows version and machine that I do actually still use: Windows 2000 Professional in a virtual machine on my MacBook Pro! 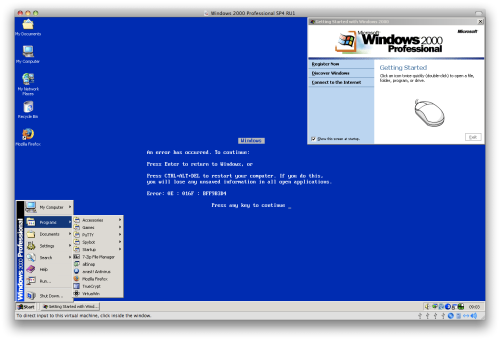 Unfortunately as resilient as the Wine compatibility layer is becoming, there are some Windows applications that just don't like being run on anything other than Windows. Surprisinly a lot of this stuff I get comes from my uni (argh), sometimes they're small utilities that only run on Windows… and then there's Solitaire.

The advantage of running Windows 2000 instead of XP (or heaven forbid the Vista trainwreck!) in a virtual machine is that you can reserve a tiny sliver of RAM for it and only 1 CPU core and it will still perform very, very well. This is especially useful when you're on a laptop: running XP or Vista alongside Mac OS X on battery power is not very fun or pratical!

Another consideration with Windows that makes 2000 useful is the commonly known fact that Windows installations degrade in performance over time to the point where it's just better to reformat your machine and reinstall Windows. With a Windows 2000 virtual machine file, the entire operating system is contained in a disk image thats only a few hundred megabytes. Compared to 1 or 2 gigabytes for Windows XP or the ridiculously bloated size of a Windows Vista install, it means it's a cinch to backup a fresh install of 2000 and restore it whenever you want. 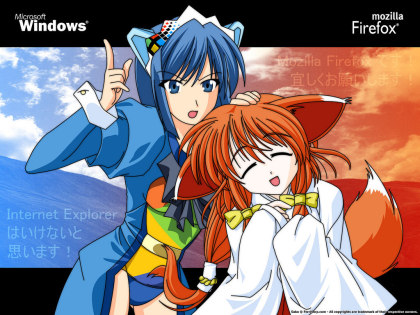 As someone who grew up using various flavours of Windows from 3.x to XP before I made the final switch to Mac OS X, FreeBSD and Linux, I say without reserve that the Windows 2000 interface is still the best that Microsoft came up with. Luna on Windows XP looked childish and the Vista interface can cause serious eye damage for a laundry list of reasons.

And the final reason why Windows 2000 is more bearable than XP or Vista? No product activation! That's right, as a legitimate licence holder I'm not treated like a criminal every time I have to restore an image! It's so refreshing!

In my next post I'll be listing some of the software I use to make Windows 2000 more bearable and feel more like a real OS, such virtual desktops, snapping windows, SSH clients and whatnot, if you're forced to use a flavour of Windows at some point.