My dad “retired” to a home up the New South Wales coast in Australia, just north of Newcastle. I say that in quotes, because if anything he’s been doing more work and projects since leaving his last full time job than before.

It’s a beautiful spot. You drive off the freeway onto a narrow, tree-flanked road that leads to a secluded, peaceful village of bungalows. Across the street sits a sheltered harbour and, behind that, the Pacific Ocean. I think its what foreigners think all of Australia is like, based on the images we portray in our tourism advertisements.

But that beauty was an obvious liability this year. I haven’t wanted to be melodramatic about it here or on Twitter, but we’ve been terrified he’d lose it to the fires, and possibly his life in the process. The Rural Fire Service Fires Near Me app has helped tremendously with tracking where the dangers are, and alerting us when there’s activity. We then share this info in our family LINE group, and get feedback on where everyone is. For all the crap IT has done to the world lately, this is easily a success story.

Earlier in the week I’d gone up to visit and possibly help if stuff hit the fan. His area had avoided the fires, but around midday we learned of three new grass fires that had started, and all within striking distance of the highway we use to leave. They were only advisories, but we didn’t take the chance. 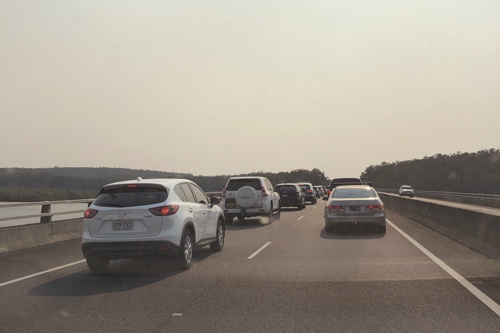 We packed up the car, and drove back to Sydney under an increasingly orange sky. The primary A1 freeway was fortunately still open, but moved glacially slow. We saw a couple of the grass fires along the highway, the last of which had been successfully put out by a team of weary looking fieries that still waved back and smiled when I gave them a thumbs up as we drove by.

This was a trivial bushfire experience, especially when I was scrolling through Twitter at all the photos of burning buildings by people who were really doing it tough during the disaster. But it was enough to still be terrifying.

In the new year I’m going to help scan the last buckets and albums of family photos. It’s likely going to take weeks, but having a few hard drives in a backpack and an encrypted cloud backup elsewhere helped hugely with peace of mind. As my dad said, everything else in the house could be replaced, but memories can’t be.