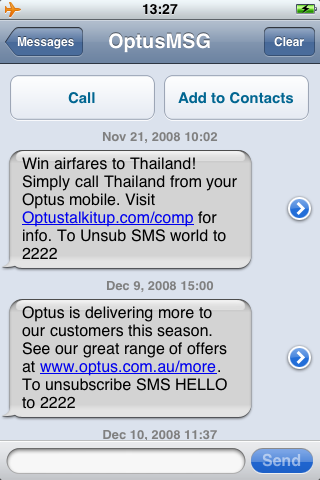 According to a story released just hours ago from the Adelaide Now website, Optus has been fined AU$110,000 for sending text message spam which was sent from a misleading phone number.

The fine is the second biggest penalty imposed for a breach of Australia’s anti-spam laws.

The messages promoted the OptusZoo entertainment service to customer mobile phones and used the sender identification 966.

Optus assumed recipients would make the connection between 966 on a mobile phone keypad, and the word “ZOO” which can also be spelt out using the three numbers, the Australian Communications and Media Authority (ACMA) said.

“However, this was not considered sufficient identification, as ‘966’ could be used to represent any number of permutations on a telephone keypad,” ACMA chairman Chris Chapman said in a statement.

Somehow their reasoning that everyone would know what that number means does sound just a little fishy. It sounds like a classic case of intentional obfuscation, then denial to me. It seems hard to believe that someone could really think a three digit number could translate using a keypad into "Zoo" which we're supposed to associate with one of their products.

If the numbers when entered into a phone magically spelt the word "Optus" I'd perhaps be marginally more forgiving… but "Zoo"? How many Optus customers are even aware that they're using that service?

Optus is of course Australia's number 2 telecommunications company behind Telstra. Writing this from Singapore is ironic given Singapore Telecom owns Optus. Budda boom.