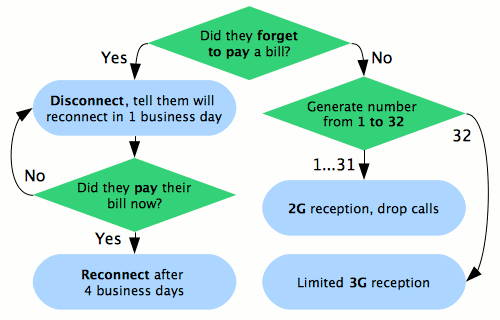 Despite technically being an overseas subsidiary of SingTel, Optus couldn't be more different. To their credit (puns are hilarious!), an Optus account is far easier to apply for than a SingTel account and has much less fine print, but you pay for this initial convenience by having far slower data speeds, spotty 3G reception and a tiny amount of data. Granted Singapore is microscopic compared to the metro area of Adelaide despite having five times as many people, but in Singapore I have full 3G reception everywhere except in lifts. I also have six times the data, for cheaper.

The other thing has to do with late payments of accounts. With SingTel if I'm late they send a series of warning letters and disconnect me, but they've always had me reconnected within an hour of my bill payment, even if it's on a weekend (yes, even Sunday!). With Optus they claim a business day before reconnection takes place, but it's taken 4 business days each time it's happened.

I'm not denying for a second it's entirely my own fault for not paying my bills, but the difference in support and service is huge. Optus needs to get their act together. I'm bullish that they're capable of it, they just need a nudge. By a huge bull. I'd be scared into changing if a bull came charging at me. Charging… like charging a phone. I'm a genius!

Given I use my iTelephone with these plans, I wonder if Neal from iPhoneUserNews.com has anything to say about this? Wonder if you get a free Guinness and a potato when you sign up for an Irish telco?