I'm sure if you're anywhere near as obsessed about operating systems as me you would have seen this graph from the ComputerWorld website floating around before, but I thought I'd post it anyway: 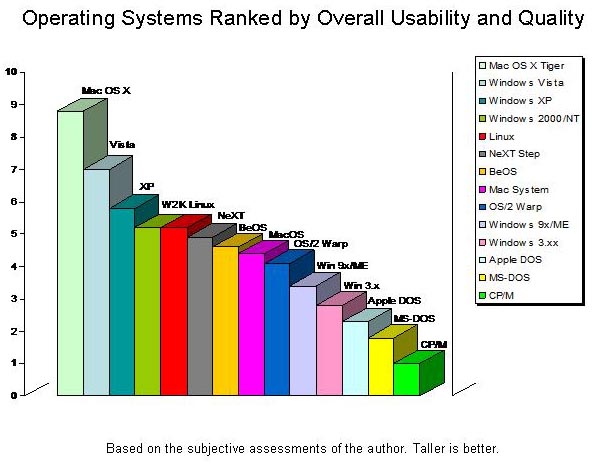 While as a 6 year user of Apple I agree with the placement of Mac OS X, I'm not sure I really agree with some of these other rankings. I really don't think Windows XP improved usability over Windows 2000; in fact (as anyone who reads this blog knows) I still use Windows 2000 for my Windows apps because I think it's more stable, usable (and easier on the eyes) than XP. And I think Vista is a hell of a lot worse than both of them… having to wait 10 seconds for a new Windows Explorer window to appear just so it can have some tizzy eye candy? How does that improve usability?!

And what's with BeOS? Sure it didn't have many drivers but it was surely more usable than that. And is CP/M really that much worse than DOS? It sure as hell seemed more reliable to me than DOS! And where's Amiga Workbench? It would have to have at least a 6.5 ;). Or GeOS for the Commodore 128? Ah to hell with it, what about the BASIC interpreter for the VIC-20? Okay, scrap that last one.

I guess we'll have to agree to disagree with these rankings.