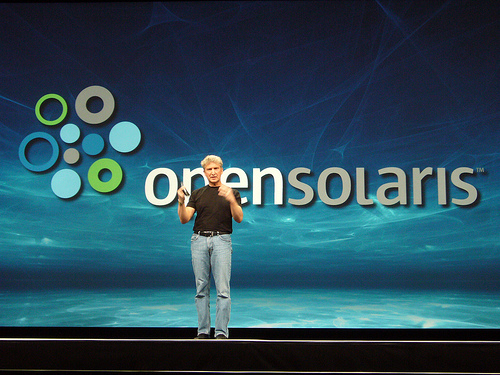 Given I'm working almost exclusively with Java and Oracle software this semester at university in three of my four courses I thought it'd be fun and worthwhile dual-booting OpenSolaris with Mac OS X Leopard on my MacBook Pro and use them both in a more "native" environment. You can download the ISOs for free from their servers, via bittorrent or you can even order a CD to be sent to you gratis. Pretty cool.

Problem is, I'm stuck. I'm attempting to install OpenSolaris 2009.06 which is the latest version at the time this post is going live. These were the steps I took:

Barely a few seconds into file copying stage, the installer #fails (uh oh I've started inadvertently using Twitter hashtags in regular blog entries, this does not bode well for my mental state!). When I clicked the log file button these were the last few errors:

I thought it could have had something to do with ZFS specifically, but doing some research online I came across this discussion thread where Basant suggests the problem is with the EFI partitioning scheme employed by Bootcamp.

Prime cause why it was failing was because of EFI partition. After I reset the partition id of EFI partition (#1) using "setpid 1to AF" and rebooted, my problem went away and opensolaris installed and booted just fine. I had also marked the partition as Active from Linux fdisk command so I didn’t need to do the fdisk.real hack.

The fdisk.real hack being referred to turns out to be this official workaround in response to a recognised bug in OpenSolaris.

Going to take another plunge, here's hoping one of these tricks does the… trick.