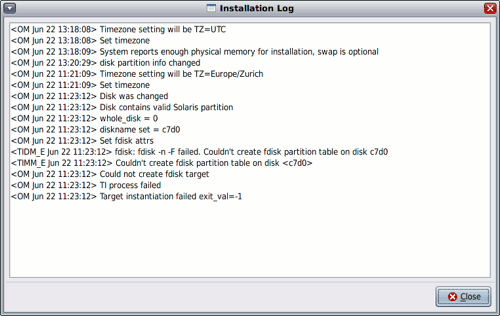 I often find I can understand things better myself when I explain what I'm attempting to do. Spock would probably say this illogical, I'd retort that not all of us have the benefit of being half Vulcan. Thank you.

Since attempting to boot my MacBook Pro with OpenSolaris and since writing about it here an hour ago I've learned more about the problem I was having with the partitioning stage.

I found this page and on their instruction I installed the Sun Device Detection Tool which checks the hardware of machines and determines whether or not OpenSolaris and Solaris have appropriate driver support. Aside from the gigabit Ethernet card, I was told my original generation MacBook Pro had full hardware support. Cool.

Returning to the aforementioned page I saw the screenshot shown above and recognised the errors instantly from when I tried to install OpenSolaris myself. Turns out OpenSolaris needs to be installed on the first partition to work; I was attempting to install it on the third partition after the EFI and Mac OS X Leopard ones respectively.

I could mess around for another few hours to try and figure out how to overcome this limitation (when I was an early teenager I was quite the dual-booting wizard) but I'm thinking I'll save myself the headache, backup my data and repartition this machine from scratch.

As I said in my previous post about this, this semester I'm working almost exclusively with Java and Oracle software and I'm SSH'ing into Solaris machines at the campus here already, and I'd like to be able to use a similar setup on my own machine too. Also I love trying new things :).