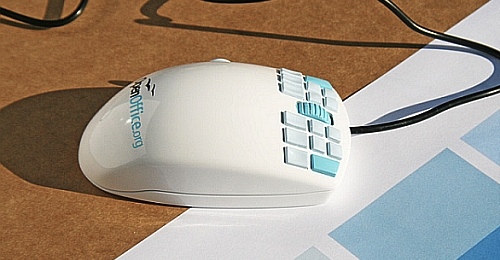 I'm generally pretty quick to pick out internet jokes from the real thing, but this latest announcement for an OpenOfficeMouse honestly had me bamboozled: were their product, website and press release for real?

Orvieto, Italy, November 6, 2009: In partnership with the OpenOffice.org community, WarMouse announced the release of the OpenOfficeMouse, the first multi-button application mouse designed for the world’s leading open-source office productivity suite. With a revolutionary and patented design featuring 18 buttons, an analog joystick, and support for as many as 52 key commands, the OpenOfficeMouse is intended to provide a faster and more efficient user interface for OpenOffice.org applications such as Writer and Calc than the conventional icons, pull-down menus, and hotkeys presently permit.

I tend to stay clear of sites like Engadget but they've picked up (to pardon a terrible mouse related pun) the story and are running with it, so I'm leaning slightly more towards thinking its true. Lots of poorly used analogies in this paragraph, I really should learn not to blog this late at night.

While initially finding myself asphyxiated by the terrible, awful, cheesy, plasticy design and requiring several stiff cups of coffee to recover, I have to say having thought about it for a day or so the idea of having a mouse with buttons like this does appeal to me. As long as the primary and secondary buttons were easy enough to differentiate from all the function buttons and I could cope with the 1990s-eque design.

Granted these are mostly keyboard based applications, but Imagine being able to perform a spell check, insert a table of a specific size, add headings and whatnot all while moving a mouse around in OpenOffice.org for example, or imagine all the things you could do with TextMate or Emacs.

It'd be like learning how to touch type on a keyboard: the learning curve would be steep and it'd take dedication and the forgoing of instant gratification when you buy it, but once you're familiar with the location of the buttons and you know instinctively what you've assigned each one to do, I imagine you could do some pretty amazing things. 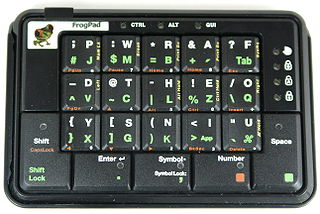 Interestingly enough, people have been using the word corded to describe it, presumably because its not wireless which we've come to expect from mouses as of late. With all those extra buttons though, it does remind me somewhat of those chorded[sic] keyboards such as the FrogPad. To me this makes this product even more intriguing, imagine if you could somehow combine buttons together to perform specific tasks and provide parameters, such as specifying the size of a new table instead of just creating one.

I must admit after Apple pulled the rug out from under me with their latest Magic Mouse which doesn't have a third mouse button. My MacBook Pro is dual booted with FreeBSD and I don't want to have to swap mouses each time I reboot! With that in mind I must say this OpenOfficeMouse looks intriguing! Wait, bad choice of words, if I got one I wouldn't want to look at it. Never mind, my hand will cover it up!

For now my aging Mighty Mouse will do, but it's something to keep in mind.